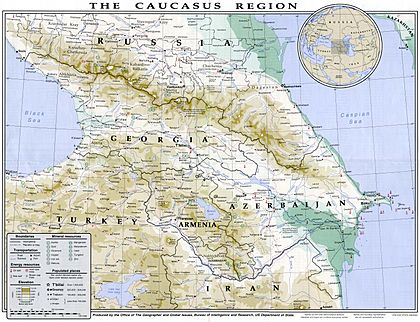 1994 map of Caucasus region prepared by the US State Department 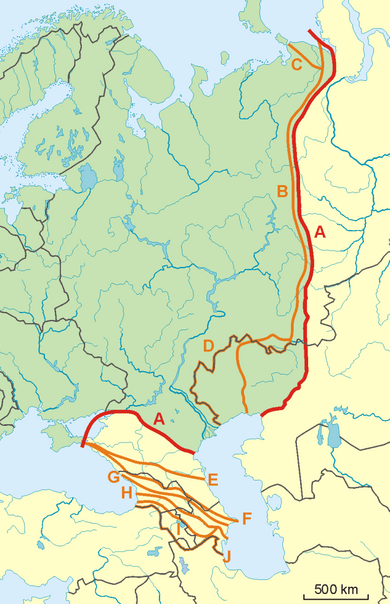 Possible definitions of the boundary between Europe and Asia on the territory of Georgia , Armenia and Azerbaijan

All of present-day Armenia is in Transcaucasia; the majority of present-day Georgia and Azerbaijan, including the exclave of Nakhchivan, also fall within the region. Parts of Iran and Turkey are also included within the region of Transcaucasia. Goods produced in the region include oil, manganese ore, tea, citrus fruits, and wine. It remains one of the most politically tense regions in the post-Soviet area, and contains three heavily disputed areas: Abkhazia, South Ossetia, and Nagorno-Karabakh. Between 1878 and 1917 the Russian-controlled province of Kars Oblast was also incorporated into the Transcaucasus.

Herodotus, Greek historian who is known as 'the Father of History' and Strabo, Greek geographer, philosopher, and historian spoke about autochthonous peoples of the Caucasus in their books. In the Middle Ages various peoples, including Scythians, Alani, Huns, Khazars, Arabs, Seljuq Turks, and Mongols settled in Caucasia. These invasions influenced on the culture of the peoples of Transcaucasia. In parallel Middle Eastern influence disseminated the Iranian languages and Islamic religion in Caucasus. 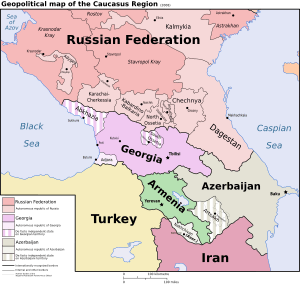 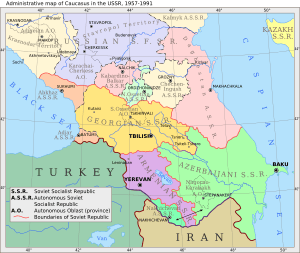 Located on the peripheries of Iran, Russia and Turkey, the region has been an arena for political, military, religious, and cultural rivalries and expansionism for centuries. Throughout its history, the region has come under control of various empires, including the Achaemenid, Neo-Assyrian Empire, Parthian, Roman, Sassanian, Byzantine, Mongol, Ottoman, successive Iranian (Safavid, Afsharid, Qajar), and Russian Empires, all of which introduced their faiths and cultures. Throughout history, Transcaucasia was usually under the direct rule of the various in-Iran based empires and part of the Iranian world. In the course of the 19th century, Qajar Iran had to irrevocably cede the region (alongside its territories in Dagestan, North Caucasus) as a result of the two Russo-Persian Wars of that century to Imperial Russia.

Ancient kingdoms of the region included Armenia, Albania and Iberia, among others. These kingdoms were later incorporated into various Iranian empires, including the Achaemenid Empire, the Parthian Empire, and the Sassanid Empire, during which Zoroastrianism became the dominant religion in the region. However, after the rise of Christianity and conversion of Caucasian kingdoms to the new religion, Zoroastrianism lost its prevalence and only survived because of Persian power and influence still lingering in the region. Thus, Transcaucasia became the area of not only military, but also religious convergence, which often led to bitter conflicts with successive Persian empires (and later Muslim-ruled empires) on the one side and the Roman Empire (and later the Byzantine Empire) on the other side.

In the middle of the 8th century, with the capture of Derbend by the Umayyad armies during the Arab–Khazar wars, most of Transcaucasia became part of the Caliphate and Islam spread throughout the region. Later, the Orthodox Christian Kingdom of Georgia dominated most of Transcaucasia. The region was then conquered by the Seljuk, Mongol, Turkic, Safavid, Ottoman, Afsharid and Qajar dynasties.

After two wars in the first half of the 19th century, namely the Russo-Persian War (1804-1813) and the Russo-Persian War (1826-1828), the Russian Empire conquered most of Transcaucasia (and Dagestan in the North Caucasus) from the Iranian Qajar dynasty, severing historic regional ties with Iran. By the Treaty of Gulistan that followed after the 1804-1813 war, Iran was forced to cede modern-day Dagestan, Eastern Georgia, and most of the Azerbaijan Republic to Russia. By the Treaty of Turkmenchay that followed after the 1826-1828 war, Iran lost all of what is modern-day Armenia and the remainder of the contemporary Azerbaijani Republic that remained in Iranian hands. After the 1828-1829 war, the Ottomans ceded Western Georgia (except Adjaria, which was known as Sanjak of Batum), to the Russians.

In 1844, what comprises present-day Georgia, Armenia and the Azerbaijan Republic were combined into a single czarist government-general, which was termed a vice-royalty in 1844-1881 and 1905-1917. Following the 1877-78 Russo-Turkish War, Russia annexed Kars, Ardahan, Agri and Batumi from the Ottomans, joined to this unit, and established the province of Kars Oblast as its most southwesterly territory in the Transcaucasus.

In August 2008, the Russo-Georgian War took place across Transcaucasia, contributing to further instability in the region, which is as intricate as the Middle East, due to the complex mix of religions (mainly Muslim and Orthodox Christian) and ethno-linguistic groups.

Transcaucasia, in particular where modern-day Turkey, Georgia, Armenia and Iran are located, is one of the native areas of the wine-producing vine Vitis vinifera. Some experts speculate that Transcaucasia may be the birthplace of wine production. Archaeological excavations and carbon dating of grape seeds from the area have dated back to 7000–5000 BC. Wine found in Iran has been dated to c. 7400 BC and c. 5000 BC, while wine found in Georgia has been dated to c. 6000 BC. The earliest winery, dated to c. 4000 BC, was found in Armenia.

All content from Kiddle encyclopedia articles (including the article images and facts) can be freely used under Attribution-ShareAlike license, unless stated otherwise. Cite this article:
Transcaucasia Facts for Kids. Kiddle Encyclopedia.