The Qajar dynasty (; Persian: سلسله قاجار Selsele-ye Qājār; ) was an Iranian royal dynasty of Turkic origin, specifically from the Qajar tribe, ruling over Iran from 1789 to 1925. The Qajar family took full control of Iran in 1794, deposing Lotf 'Ali Khan, the last Shah of the Zand dynasty, and re-asserted Iranian sovereignty over large parts of the Caucasus. In 1796, Mohammad Khan Qajar seized Mashhad with ease, putting an end to the Afsharid dynasty, and Mohammad Khan was formally crowned as Shah after his punitive campaign against Iran's Georgian subjects. In the Caucasus, the Qajar dynasty permanently lost many of Iran's integral areas to the Russians over the course of the 19th century, comprising modern-day Georgia, Dagestan, Azerbaijan and Armenia.

Today, the descendants of the Qajars often identify themselves as such and hold reunions to stay socially acquainted through the Kadjar (Qajar) Family Association, often coinciding with the annual conferences and meetings of the International Qajar Studies Association (IQSA). The Kadjar (Qajar) Family Association was founded for a third time in 2000. Two earlier family associations were stopped because of political pressure. The offices and archives of IQSA are housed at the International Museum for Family History in Eijsden.

The shah and his consort were styled Imperial Majesty. Their children were addressed as Imperial Highness, while male-line grandchildren were entitled to the lower style of Highness; all of them bore the title of Shahzadeh or Shahzadeh Khanoum.

The headship of the Imperial Family is inherited by the eldest male descendant of Mohammad Ali Shah.

The Heir Presumptive is the Qajar heir to the Persian throne. 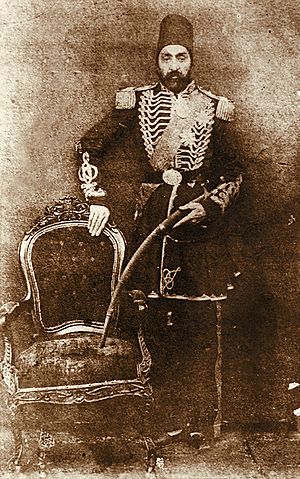 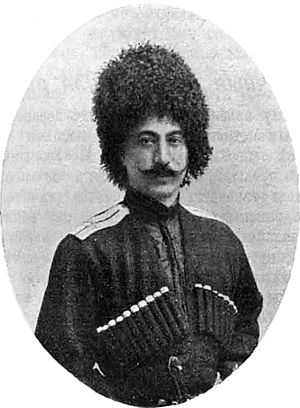 All content from Kiddle encyclopedia articles (including the article images and facts) can be freely used under Attribution-ShareAlike license, unless stated otherwise. Cite this article:
Qajar dynasty Facts for Kids. Kiddle Encyclopedia.