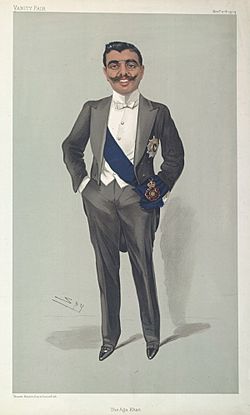 The Aga Khan in 1904. Chromolithograph by 'Spy' in Vanity Fair magazine

He became Imam at a very young age. He was seven years old when his father, Aga Khan II, died in 1885. He was one of the founders and the first president of the All-India Muslim League, and served as President of the League of Nations from 1937-38.

He was born in Karachi, in what was British India. He was given a religious education, and also a European education. He attended Eton and Cambridge University, and was a frequent visitor to Britain.

His followers celebrated his anniversaries as Imam in 1937, 1946 and 1954 by weighing him in gold, diamonds and platinum. The proceeds were spent on welfare and development in Asia and Africa. Girls schools were set up in the remote northern areas of what is now Pakistan. He was knighted by Queen Victoria, and later made a member of the Privy Council.

His choice of successor

At the end of his life, Sir Sultan Mohammed did a remarkable thing. In his will, he disinherited his son, Aly Khan, in favour of his grandson, Karim. So the next Khan, Aga Khan IV, was a younger man better suited to the modern world.

The Aga Khan's mausoleum is near the Nile at Aswan, Egypt.

All content from Kiddle encyclopedia articles (including the article images and facts) can be freely used under Attribution-ShareAlike license, unless stated otherwise. Cite this article:
Aga Khan III Facts for Kids. Kiddle Encyclopedia.