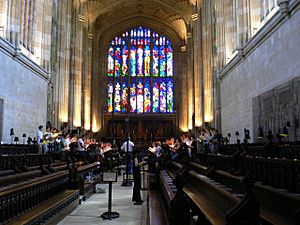 The chapel at Eton College

Eton College, or just Eton, is a British independent school for boys founded in 1440 by King Henry VI, as the King's College of Our Lady of Eton.

Eton College is in Eton, near Windsor in the English county of Berkshire. It is north of Windsor Castle. The school is one of the original nine English "public schools" as defined by the Public Schools Act 1868. The school is a member of the Eton Group of independent schools in the United Kingdom. Tony Little is the headmaster. For every 8 pupils there is one teacher.

Eton is a full boarding school. All pupils live at the school. It is one of four such remaining boys' public schools (the others being Winchester College, Harrow School, and Radley College). Eton has educated generations of British and foreign aristocracy and members of the Royal family, the most recent being Prince William and his brother Prince Harry. The list of graduates includes nineteen former British Prime Ministers, including David Cameron. The Good Schools Guide has called the school "the number one boys' public school," adding, "The teaching and facilities are second to none." The school is a member of the G20 Schools Group. It is a charity.

All content from Kiddle encyclopedia articles (including the article images and facts) can be freely used under Attribution-ShareAlike license, unless stated otherwise. Cite this article:
Eton College Facts for Kids. Kiddle Encyclopedia.