Church of England facts for kids 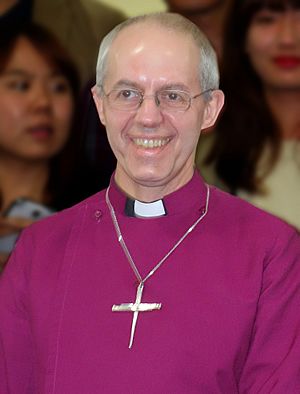 The Church of England is the leading Christian church in England.

It is the church established by law, with its formal head being the English monarch (Elizabeth II). It is the mother church of the Anglican Communion.

The Church of England understands itself to be both Catholic and Reformed:

There are other Protestant churches in England which are not part of the Anglican Communion.

Under his son, King Edward VI, more Protestant forms of worship were adopted. The Archbishop of Canterbury, Thomas Cranmer started more changes. A new pattern of worship was set out in the Book of Common Prayer (1549 and 1552). These were based on the older liturgy but influenced by Protestant principles.

All content from Kiddle encyclopedia articles (including the article images and facts) can be freely used under Attribution-ShareAlike license, unless stated otherwise. Cite this article:
Church of England Facts for Kids. Kiddle Encyclopedia.