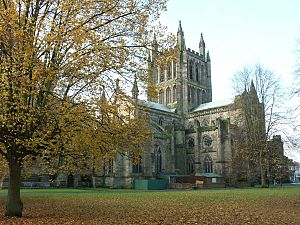 Hereford Cathedral is a church in the town of Hereford. The present building was started in 1079. Before that there were two other cathedrals. It is the seat of the Bishop of Hereford.

The most famous treasure in Hereford Cathedral is the Mappa Mundi, a mediæval map of the world dating from the 13th century. The cathedral is a Grade I listed building.

The building of the cathedral

The first Hereford Cathedral was a stone building from the 7th century. After about 200 years it was changed, but then it was burnt down in 1056 by Welsh and Irish soldiers. The rebuilding started in 1079 and it was finished around 1140.

Many changes have been made since that time. The cathedral originally had Norman architecture, but not much of that has survived. By the end of the 13th century most of it had been changed. The changes continued in the 14th century when the central tower was rebuilt. Many other parts were added, the last big change was the adding of the main north entrance finished in 1535. This was mostly the cathedral we see today. 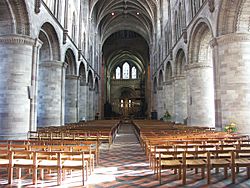 The nave with Norman columns

The Norman columns and arches of the nave have some decorations. They are original, done in the early 12th century. In the south aisle of the nave there are two tombs dating from the 14th century tombs. They are for members of the clergy but we do not know who they are. There is a tomb for Sir Richard Pembridge who was a Knight of the Garter.

There is a modern rood screen, a big lantern, and a reredos (a screen or decoration behind the altar). The Lady Chapel has lancet windows (tall, narrow windows) and lots of ornaments. There is a bit of ancient ironwork in the tomb of Bishop Booth who had the porch built There is also a large Norman font. The north transept was built in the Decorated Gothic. It has the shrine of St. Thomas of Hereford. The north window has some beautiful 19th century stained glass.

The tomb of the shrine of Bishop Cantilupe is built of Purbeck marble. The south transept may be the oldest part of the cathedral. The choir (the part of the cathedral where the choir sit), has many beautiful features. There is a reredos which represents Jesus on the cross. Two pointed arches show Christ with angels and the four evangelists. There is also a very strange, old Episcopal chair.

The organ was built in 1892 by Henry Willis. It is one of the best organs he made. Organists of the past include John Bull and Samuel Sebastian Wesley. Today the organist is Geraint Bowen. There has been a choir at Hereford Cathedral from at least as far back as the 13th century. Hereford Cathedral is one of the three cathedrals which house the Three Choirs Festival. In the tower there are 10 bells. They are often called the "Grand Old Lady".

The famous Hereford Mappa Mundi (Map of the World) dates from the 13th century. It is the largest (except for one) map from that period drawn on a single sheet of vellum. It was ignored for many years, then in 1855 it was cleaned and repaired at the British Museum. It shows the world as round, with the ocean all around it. It was nearly sold in the 1980s, but money was found to build a library where it could be hanged. This is where it is now.

Another famous document is one of only four copies of the Magna Carta to survive. It is kept very carefully, and sometimes shown to the public in the library next to the Mappa Mundi.

All content from Kiddle encyclopedia articles (including the article images and facts) can be freely used under Attribution-ShareAlike license, unless stated otherwise. Cite this article:
Hereford Cathedral Facts for Kids. Kiddle Encyclopedia.