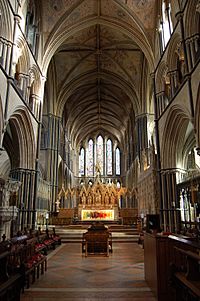 The east end of Worcester Cathedral.

Worcester Cathedral is an Anglican cathedral in Worcester, England. It stands on a bank overlooking the River Severn. It is the seat of the Anglican Bishop of Worcester. Its official name is The Cathedral Church of Christ and the Blessed Mary the Virgin of Worcester. It was built between 1084 and 1504, so therefore there are many different kinds of architecture, from Norman to Perpendicular Gothic. It is famous for its Norman crypt and the unusual chapter house.

The Cathedral was founded in 680 with Bishop Bosel as its head. Most of the cathedral we see today dates from the 12th and 13th centuries.

After the Dissolution of the Monasteries, the building became a cathedral of secular clergy again. The cathedral often had restoration work done, especially by Sir George Gilbert Scott and A. E. Perkins in the 1860s. Both men are buried at the cathedral.

In the chancel of the cathedral is the tomb of King John. The cathedral has a memorial, Prince Arthur's Chantry, to the young prince Arthur Tudor, who is buried here. Arthur's younger brother and next in line for the throne was Henry VIII. Worcester Cathedral was not destroyed by Henry VIII during the English Reformation because of his brother's chantry in the cathedral.

The tower has a ring of twelve bells plus three semitone bells and a non-swinging bourdon. They are some of the most beautiful church bells ever made. There is a teaching centre with eight special training bells, linked to computers. 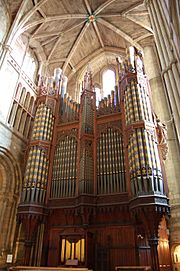 The composer Edward Elgar spent most of his life in Worcestershire. The first performance of his Enigma Variations took place at the cathedral during the 1899 festival. There is a stained glass window which contains his portrait.

Worcester Cathedral has a long history of organs dating back to at least 1417. Until recently there was a large four-manual organ, originally built by Hope Jones. Most of this organ was removed in 2006 in order to make way for a new instrument by Kenneth Tickell, which was completed in the summer of 2008.

All content from Kiddle encyclopedia articles (including the article images and facts) can be freely used under Attribution-ShareAlike license, unless stated otherwise. Cite this article:
Worcester Cathedral Facts for Kids. Kiddle Encyclopedia.