John of England facts for kids

John (24 December 1166 – 19 October 1216), also known as John Lackland, was King of England from 1199 until his death in 1216. John lost the Duchy of Normandy and most of his other French lands to King Philip II of France, resulting in the collapse of the Angevin Empire and contributing to the subsequent growth in power of the French Capetian dynasty during the 13th century. The baronial revolt at the end of John's reign led to the sealing of Magna Carta, a document sometimes considered an early step in the evolution of the constitution of the United Kingdom.

John, the youngest of five sons of King Henry II of England and Duchess Eleanor of Aquitaine, was at first not expected to inherit significant lands. Following the failed rebellion of his elder brothers between 1173 and 1174, however, John became Henry's favourite child. He was appointed the Lord of Ireland in 1177 and given lands in England and on the continent. By the time Richard I became king in 1189, John was a potential heir to the throne. When Richard died in 1199, John was proclaimed King of England, and came to an agreement with Philip II of France to recognise John's possession of the continental Angevin lands at the peace treaty of Le Goulet in 1200.

Richard I pardons his brother Prince John at the request of their mother, Eleanor of Aquitaine

When war with France broke out again in 1202, John achieved early victories, but shortages of military resources and his treatment of Norman, Breton, and Anjou nobles resulted in the collapse of his empire in northern France in 1204. John spent much of the next decade attempting to regain these lands, raising huge revenues, reforming his armed forces and rebuilding continental alliances. John's judicial reforms had a lasting impact on the English common law system, as well as providing an additional source of revenue.

An argument with Pope Innocent III led to John's excommunication in 1209, a dispute finally settled by the king in 1213. John's attempt to defeat Philip in 1214 failed due to the French victory over John's allies at the battle of Bouvines. When he returned to England, John faced a rebellion by many of his barons, who were unhappy with his policies and his treatment of many of England's most powerful nobles.

Although both John and the barons agreed to the Magna Carta peace treaty in 1215, neither side complied with its conditions. Civil war broke out shortly afterwards, with the barons aided by Louis of France. It soon descended into a stalemate. John died of dysentery contracted whilst on campaign in eastern England during late 1216; supporters of his son Henry III went on to achieve victory over Louis and the rebel barons the following year.

Modern historians agree that he had many faults as king, such as pettiness, spitefulness, and cruelty. These negative qualities provided extensive material for fiction writers in the Victorian era, and John remains a recurring character within Western popular culture, primarily as a villain in films and stories depicting the Robin Hood legends.

In 1189, John was married to Isabel of Gloucester. They had no children. John had their marriage annulled, and she was never acknowledged as queen. John remarried, on 24 August 1200, Isabella of Angoulême. John had kidnapped her from her fiancé, Hugh X of Lusignan. 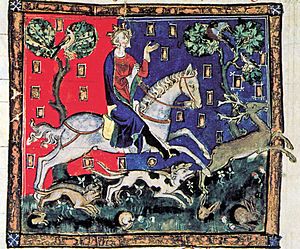 John on a stag hunt, from De Rege Johanne

Retreating from the French invasion, John took a safe route around the marshy area of The Wash to avoid the rebel held area of East Anglia. His slow baggage train (including the Crown Jewels), took a direct route across it and was lost to the incoming tide. This dealt John a terrible blow, which affected his health and state of mind. Succumbing to dysentery and moving from place to place, he died at Newark Castle. He was buried in Worcester Cathedral. 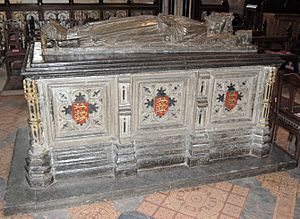 King John's reign began with military defeats – he lost Normandy to Philip II of France in his first five years on the throne. His reign ended with England torn by civil war and himself on the verge of being forced out of power. In 1213, he made England a papal fief to resolve a conflict with the Catholic Church, and his rebellious barons forced him to seal Magna Carta in 1215, the act for which he is best remembered.

John is responsible for the creation of another English cultural icon, the historic, medieval London Bridge. To finance the construction of a large bridge across the Thames, King John allowed houses, shops, and a church to be built on top of the bridge.

All content from Kiddle encyclopedia articles (including the article images and facts) can be freely used under Attribution-ShareAlike license, unless stated otherwise. Cite this article:
John of England Facts for Kids. Kiddle Encyclopedia.