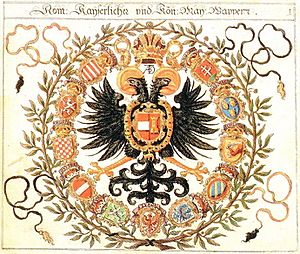 Coats of arms of Maximilian II, Holy Roman Emperor from 1564 to 1576. The Emperors used the double-headed eagle as a symbol of their authority

This list includes all emperors of the Holy Roman Empire, whether or not they called themselves Holy Roman Emperor. There are some gaps. For example, Henry the Fowler was King of Germany but not Emperor.

Emperors before Otto the Great

All content from Kiddle encyclopedia articles (including the article images and facts) can be freely used under Attribution-ShareAlike license, unless stated otherwise. Cite this article:
Holy Roman Emperor Facts for Kids. Kiddle Encyclopedia.