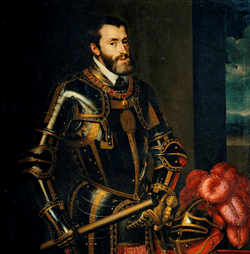 Philip the Handsome (son of Maximilian I of Austria and Mary of Burgundy) and Joanna the Mad (daughter of Ferdinand II of Aragon and Isabella I of Castile) were his parents. He ruled Austria, Spain, Two Sicilies, Sardinia, Germany, Belgium, Holland, Luxembourg, Hungary, Bohemia, Croatia, Mexico, Peru, and Venezuela.

His Majesty or His Imperial Majesty was first used when he was king. His Empire became large and was known as "in which the sun does not set". He was also known as "The Emperor of Universal Dominion."

He divided his empire between his brother Ferdinand I, Holy Roman Emperor and his son Philip II of Spain.

All content from Kiddle encyclopedia articles (including the article images and facts) can be freely used under Attribution-ShareAlike license, unless stated otherwise. Cite this article:
Charles V, Holy Roman Emperor Facts for Kids. Kiddle Encyclopedia.