House of Habsburg facts for kids 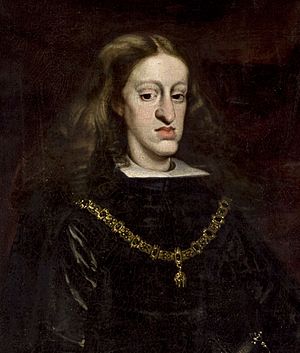 Charles II of Spain had disabilities probably caused by inbreeding in the House of Habsburg
This article is about the Austrian Dynasty. For the town in Switzerland, see Habsburg, Switzerland.

Habsburg was a family of dukes, kings, and monarchs. They were very important in European history. They first ruled parts of Switzerland in the 13th century. They ruled Austria, later Austria-Hungary for more than 600 years, and also sometimes owned Spain and the Netherlands. They ruled the Holy Roman Empire from about 1280 to 1806. They also ruled the Kingdom of Sardinia until the middle 19th century.

A Treaty was made in Vienna in 1515 between the king of Poland and duke of Lithuania from the Jagiellon dynasty and Maximilian I, Holy Roman Emperor, duke of Austria from the Habsburg family. It said that if the kings of Bohemia and Hungary, (Jagiellons), were to die without male heirs the Duke of Austria would take over their territory.

End of the House

The House of Habsburg became extinct in the 18th century. The senior branch ended when Charles II of Spain died in 1700 and was replaced by the House of Bourbon. The mental and physical handicaps of Charles II were probably caused by inbreeding between relatives in the royal houses of continental Europe. Marriages of close relatives occurred for five generations before him. He was the son of Philip IV, who married his sister's daughter.

The remaining branch went extinct in the male line in 1740 with the death of Holy Roman Emperor Charles VI and completely in 1780 with the death of his eldest daughter, Maria Theresa of Austria. It was succeeded by the Vaudemont branch of the House of Lorraine. The new successor house styled itself formally as House of Habsburg-Lorraine (German: Habsburg-Lothringen), although it was often referred to as simply the House of Habsburg.

The last empress was Zita of Bourbon-Parma. She died in Switzerland in 1989. She had ruled with her husband, Charles I of Austria, from 1916 to 1918.

All content from Kiddle encyclopedia articles (including the article images and facts) can be freely used under Attribution-ShareAlike license, unless stated otherwise. Cite this article:
House of Habsburg Facts for Kids. Kiddle Encyclopedia.