Kids Encyclopedia Facts
Not to be confused with Roman Empire, Byzantine Empire, or Western Roman Empire.

The Holy Roman Empire (Latin: Sacrum Imperium Romanum; German: Heiliges Römisches Reich), occasionally but unofficially referred to as the Holy Roman Empire of the German Nation, was a group of regions and free cities in central Europe which all came under the rule of an emperor who was elected by the princes and magistrates of the regions and cities within the empire. When Charlemagne died, his Frankish Empire was given to his children and divided into three different countries: West Francia, Lotharingia and East Francia. The Holy Empire started when Otto I of East Francia became emperor in 962, and it was ended by Napoleon in 1806. The emperors claimed to be heirs of Charlemagne and that the Empire dates from 800, when Charlemagne became Frankish Emperor.

In the 16th century the Holy Roman Empire (HRE) had to deal with the rebellion of the Frisians lead by Pier Gerlofs Donia and Wijerd Jelckama. This lasted from 1515 until 1523.

In the 17th century the Empire was shattered by the Thirty Years' War (1618-1648). Nearly thirty percent of the population of the Empire was killed. The Holy Roman Empire of the German Nation lost parts of its territory.

Until the 13th century, the Holy Roman Empire was powerful. Later, all the duchies and counties inside the Empire started to get more power. At the end, the emperors had little real power anymore, and the country existed only in name. The last emperor abolished the empire in 1806 during the Napoleonic Wars.

Voltaire, a French philosopher in the 18th century, once joked that the nation was neither holy, nor Roman, nor an empire.

The Empire was in fact Germanic and not Roman since it was mainly in the regions of present-day Germany and Austria. It was not really holy since, after Charles V in 1530, no emperors were crowned by the Pope. It was only really an Empire by name: the territories it covered were mostly independent. The Empire had its own central government and armed forces that acted as one. It was ruled by the House of Habsburg before that fell in 1806. Napoleon forced the emperor to abdicate when France began invading the Holy Roman Empire during the First French Empire. The Emperor made himself emperor of Austria and ended the Holy Roman Empire.

The Holy Roman Empire was not a highly centralized state like most countries today. Instead, it was divided into dozens – eventually hundreds – of individual entities governed by kings, dukes, counts, bishops, abbots, and other rulers. They were collectively known as princes. The Emperor directly ruled some areas. At no time could the Emperor simply issue decrees and govern autonomously over the Empire. His power was severely restricted by the various local leaders.

The Empire was one of the rare countries in Europe that had an elective monarchy. This meant that the Emperor was chosen by a small group of Prince-electors. Common practice was to just elect the deceased Emperor or Empress 's heir to the throne. 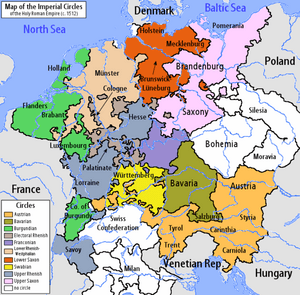 A map of the empire.

All content from Kiddle encyclopedia articles (including the article images and facts) can be freely used under Attribution-ShareAlike license, unless stated otherwise. Cite this article:
Holy Roman Empire Facts for Kids. Kiddle Encyclopedia.