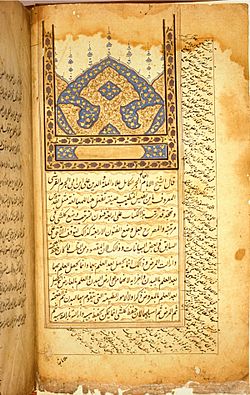 The opening page of one of Ibn al-Nafis' medical works. This is probably a copy made in India during the 17th or 18th century.

The Mongol empire was founded by Genghis Khan, which stretched from Eastern Asia to Eastern Europe. The conquests of Hulagu Khan and other Mongol invasions changed the course of the Muslim world, most notably the siege of Baghdad (1258), the destruction of the House of Wisdom and the weakening of the Mamluks and Rums which, according to historians, caused the decline of the Islamic Golden Age. Other Muslim powers such as the Mali Empire and Delhi Sultanate conquered large parts of West Africa and the Indian subcontinent, while Buddhism witnessed a decline through the conquest led by Bakhtiyar Khilji.

In the history of European culture, this period is considered part of the High Middle Ages. In North America, according to some population estimates, the population of Cahokia grew to being equal to or larger than the population of 13th-century London.

In Peru, the Kingdom of Cuzco begins. The Kanem Empire in what is now Chad reaches its apex.

Note: years before or after the 13th century are in italics.

All content from Kiddle encyclopedia articles (including the article images and facts) can be freely used under Attribution-ShareAlike license, unless stated otherwise. Cite this article:
13th century Facts for Kids. Kiddle Encyclopedia.