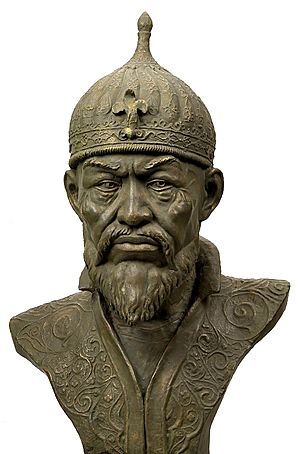 Tamerlane The Conqueror, the founder of the Timurid Empire. 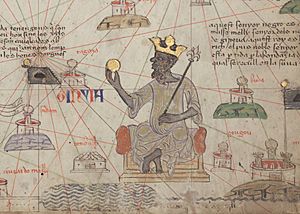 Mansa Musa I of Mali, described as the wealthiest individual in history

As a means of recording the passage of time, the 14th century was a century lasting from 1 January 1301 (MCCCI), to 31 December 1400 (MCD). It is estimated that the century witnessed the death of more than 45 million lives from political and natural disasters in both Europe and the Mongol Empire. West Africa and the Indian Subcontinent experienced economic growth and prosperity.

In Europe, the Black Death claimed 25 million lives – wiping out one third of the European population – while the Kingdom of England and the Kingdom of France fought in the protracted Hundred Years' War after the death of Charles IV, King of France led to a claim to the French throne by Edward III, King of England. This period is considered the height of chivalry and marks the beginning of strong separate identities for both England and France as well as the foundation of the Italian Renaissance and Ottoman Empire.

In Asia, Tamerlane (Timur), established the Timurid Empire, history's third largest empire to have been ever established by a single conqueror. Scholars estimate that Timur's military campaigns caused the deaths of 17 million people, amounting to about 5% of the world population at the time. Synchronously, the Timurid Renaissance emerged. In the Arab world, historian and political scientist Ibn Khaldun and explorer Ibn Battuta made significant contributions. In India, the Bengal Sultanate got divided from the Delhi Sultanate, a major trading nation in the world. The sultanate was described by the Europeans as the richest country to trade with. The Mongol court was driven out of China and retreated to Mongolia, the Ilkhanate collapsed, the Chaghatayid dissolved and broke into two parts, and the Golden Horde lost its position as a great power in Eastern Europe.

In Africa, the wealthy Mali Empire, a global leader of gold production, reached its territorial and economic height under the reign of Mansa Musa I of Mali, the wealthiest individual of the medieval times, and according to various sources as history's ever.

Note: years before or after the 14th century are in italics.

All content from Kiddle encyclopedia articles (including the article images and facts) can be freely used under Attribution-ShareAlike license, unless stated otherwise. Cite this article:
14th century Facts for Kids. Kiddle Encyclopedia.