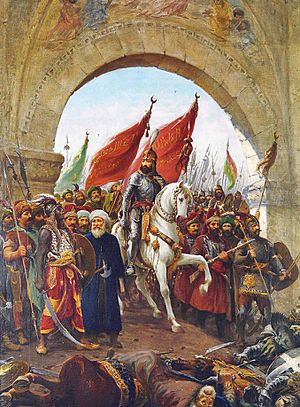 Ottoman's Mehmed II, the Islamic conquest of Constantinople and the fall of the Byzantine Empire. Various historians describe it as the end of the Middle Ages.

The Capitulation of Granada by Francisco Pradilla Ortiz, 1882: Muhammad XII surrenders to Ferdinand and Isabella 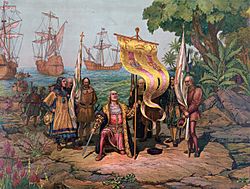 In Europe, the 15th century includes parts of the Late Middle Ages, the Early Renaissance, and the early modern period. Many technological, social and cultural developments of the 15th century can in retrospect be seen as heralding the "European miracle" of the following centuries. The architectural perspective, and the modern fields which are known today as banking and accounting were founded in Italy.

Constantinople, known as the Capital of the World and the Capital of the Byzantine Empire (today's Turkey), fell to the emerging Muslim Ottoman Turks, marking the end of the tremendously influential Byzantine Empire and, for some historians, the end of the Middle Ages. This led to the migration of Greek scholars and texts to Italy, while Johannes Gutenberg's invention of the mechanical movable type began the printing press. These two events played key roles in the development of the Renaissance. The Roman Papacy was split in two parts in Europe for decades (the so-called Western Schism), until the Council of Constance. The division of the Catholic Church and the unrest associated with the Hussite movement would become factors in the rise of the Protestant Reformation in the following century. Islamic Spain (Al-Andalus) became dissolved through the Christian Reconquista, followed by the forced conversions and the Muslim rebellion, ending over seven centuries of Islamic rule and returning Spain, Portugal and Southern France to Christian rulers.

The search for the wealth and prosperity of India's Bengal Sultanate led to the colonization of the Americas by Christopher Columbus in 1492 and the Portuguese voyages by Vasco da Gama, which linked Europe with the Indian subcontinent, ushering the period of Iberian empires.

The Hundred Years' War ended with a decisive French victory over the English in the Battle of Castillon. Financial troubles in England following the conflict resulted in the Wars of the Roses, a series of dynastic wars for the throne of England. The conflicts ended with the defeat of Richard III by Henry VII at the Battle of Bosworth Field, establishing the Tudor dynasty in the later part of the century.

In Asia, the Timurid Empire collapsed, and the Afghan Pashtun Lodi dynasty was founded under the Delhi Sultanate. Under the rule of the Yongle Emperor, who built the Forbidden City and commanded Zheng He to explore the world overseas, the Ming Dynasty's territory reached its pinnacle.

In Africa, the spread of Islam lead to the destruction of the Christian kingdoms of Nubia, by the end of the century, leaving only Alodia (which was to collapse in 1504). The formerly vast Mali Empire teetered on the brink of collapse, under pressure from the rising Songhai Empire.

In the Americas, both the Inca Empire and the Aztec Empire reached the peak of their influence, but the European colonization of the Americas changed the course of modern history.

Note: years before or after the 15th century are in italics.

All content from Kiddle encyclopedia articles (including the article images and facts) can be freely used under Attribution-ShareAlike license, unless stated otherwise. Cite this article:
15th century Facts for Kids. Kiddle Encyclopedia.