Joan of Arc facts for kids

Joan of Arc (6 January c. 1412 – 30 May 1431), nicknamed "The Maid of Orléans", is considered a heroine of France for her role during the Lancastrian phase of the Hundred Years' War, and was canonized as a Roman Catholic saint. She was born to Jacques d'Arc and Isabelle Romée, a peasant family, at Domrémy in north-east France.

Joan claimed to have received visions of the Archangel Michael, Saint Margaret, and Saint Catherine of Alexandria instructing her to support Charles VII and recover France from English domination late in the Hundred Years' War. The uncrowned King Charles VII sent Joan to the siege of Orléans as part of a relief mission. She gained prominence after the siege was lifted only nine days later. Several additional swift victories led to Charles VII's coronation at Reims. This long-awaited event boosted French morale and paved the way for the final French victory.

On 23 May 1430, she was captured at Compiègne by the Burgundian faction, a group of French nobles allied with the English. She was later handed over to the English and put on trial by the pro-English bishop Pierre Cauchon on a variety of charges. After Cauchon declared her guilty she was burned at the stake on 30 May 1431, dying at about nineteen years of age. 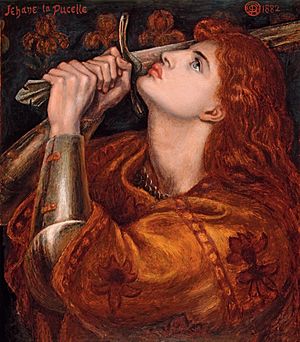 In 1456, an inquisitorial court authorized by Pope Callixtus III examined the trial, exposed the falseness of the charges against her, pronounced her innocent, and declared her a martyr. In the 16th century she became a symbol of the Catholic League, and in 1803 she was declared a national symbol of France by the decision of Napoleon Bonaparte. She was beatified in 1909 and canonized in 1920.

Joan of Arc is one of the nine secondary patron saints of France, along with Saint Denis, Saint Martin of Tours, Saint Louis, Saint Michael, Saint Rémi, Saint Petronilla, Saint Radegund and Saint Thérèse of Lisieux.

Joan of Arc has remained a popular figure in literature, painting, sculpture, and other cultural works since the time of her death, and many famous writers, playwrights, filmmakers, artists, and composers have created, and continue to create, cultural depictions of her. 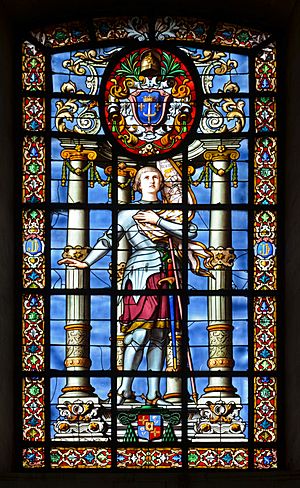 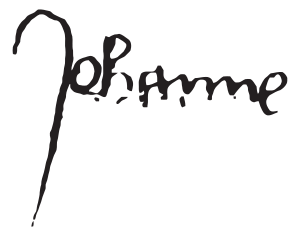 Joan of Arc became a semi-legendary figure for the four centuries after her death. The main sources of information about her were chronicles. Five original manuscripts of her condemnation trial surfaced in old archives during the 19th century. Soon, historians also located the complete records of her rehabilitation trial, which contained sworn testimony from 115 witnesses, and the original French notes for the Latin condemnation trial transcript. Various contemporary letters also emerged, three of which carry the signature Jehanne in the unsteady hand of a person learning to write. This unusual wealth of primary source material is one reason DeVries declares, "No person of the Middle Ages, male or female, has been the subject of more study." Joan of Arc came from an obscure village and rose to prominence when she was a teenager, and she did so as an uneducated peasant.

From Christine de Pizan to the present, women have looked to Joan as a positive example of a brave and active woman. She operated within a religious tradition that believed an exceptional person from any level of society might receive a divine calling. Some of her most significant aid came from women.

Three separate vessels of the French Navy have been named after her, including a helicopter carrier that was retired from active service on 7 June 2010. At present, the French far-right political party Front National holds rallies at her statues, reproduces her image in the party's publications, and uses a tricolor flame partly symbolic of her martyrdom as its emblem. This party's opponents sometimes satirize its appropriation of her image. The French civic holiday in her honour, set in 1920, is the second Sunday of May.

World War I songs include "Joan of Arc, They Are Calling You", and "Joan of Arc's Answer Song".

All content from Kiddle encyclopedia articles (including the article images and facts) can be freely used under Attribution-ShareAlike license, unless stated otherwise. Cite this article:
Joan of Arc Facts for Kids. Kiddle Encyclopedia.