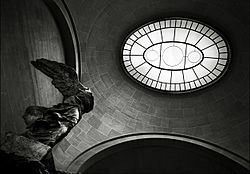 The Louvre is a museum in Paris, which attracts millions of visitors every year because of its art collection. It is the most popular art museum in the world.

The most famous picture in the Louvre is the Mona Lisa by Leonardo da Vinci, but there are also paintings by other great painters like Rembrandt, Giambattista Pittoni, Caravaggio, Rubens, Titian and Eugène Delacroix.

There are also statues inside the Louvre. The most famous statues are the Venus de Milo and the Winged Victory of Samothrace.

History of the Louvre

Philip II of France built a castle called the Castle of the Louvre. It used to be where the museum is. They used the castle as a fortress to defend Paris against the Vikings. Charles V, King of France turned the castle into a palace. However, Francis I, King of France, knocked it down and built a new palace.

Main page: Pyramid of the Louvre

By 1874, the Louvre Palace had achieved its present form of an almost rectangular structure with the Sully Wing to the east containing the Cour Carrée (Square Court) and the oldest parts of the Louvre; and two wings which wrap the Cour Napoléon, the Richelieu Wing to the north and the Denon Wing, which borders the Seine to the south. In 1983, French President François Mitterrand proposed, as one of his Grands Projets, the Grand Louvre plan to renovate the building and relocate the Finance Ministry, allowing displays throughout the building.

Architect I. M. Pei was awarded the project and proposed a glass pyramid to stand over a new entrance in the main court, the Cour Napoléon. The pyramid and its underground lobby were inaugurated on 15 October 1988 and the Louvre Pyramid was completed in 1989. The second phase of the Grand Louvre plan, La Pyramide Inversée (The Inverted Pyramid), was completed in 1993. As of 2002, attendance had doubled since completion.

The Louvre Palace and the pyramid (by night)

The Louvre Palace and the pyramid (by day)

All content from Kiddle encyclopedia articles (including the article images and facts) can be freely used under Attribution-ShareAlike license, unless stated otherwise. Cite this article:
Louvre Facts for Kids. Kiddle Encyclopedia.