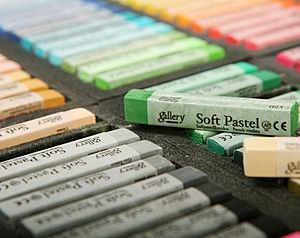 A pastel is an art medium in the form of a stick, consisting of pure powdered pigment and a binder. The pigments used in pastels are the same as those used to produce all colored art media, including oil paints; the binder is of a neutral hue and low saturation. The color effect of pastels is closer to the natural dry pigments than that of any other process.

Pastels have been used by artists since the Renaissance, and gained considerable popularity in the 18th century, when a number of notable artists made pastel their primary medium.

An artwork made using pastels is called a pastel (or a pastel drawing or pastel painting). Pastel used as a verb means to produce an artwork with pastels; as an adjective it means pale in color. 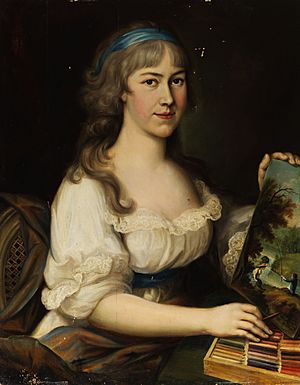 A young woman with pastel box and painting 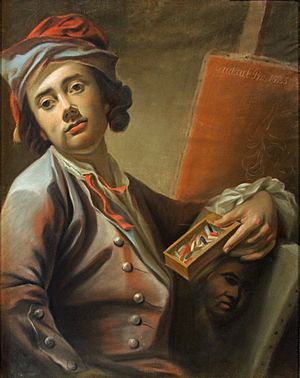 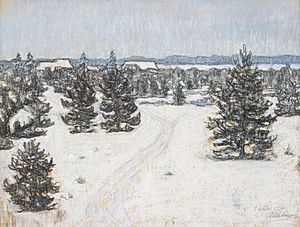 Pastel sticks or crayons consist of pure powdered pigment combined with a binder. The exact composition and characteristics of an individual pastel stick depends on the type of pastel and the type and amount of binder used. It also varies by individual manufacturer.

Dry pastels have historically used binders such as gum arabic and gum tragacanth. Methyl cellulose was introduced as a binder in the twentieth century. Often a chalk or gypsum component is present. They are available in varying degrees of hardness, the softer varieties being wrapped in paper. Some pastel brands use pumice in the binder to abrade the paper and create more tooth.

Dry pastel media can be subdivided as follows:

In addition, pastels using a different approach to manufacture have been developed:

There has been some debate within art societies as to what exactly counts as a pastel. The Pastel Society within the UK (the oldest pastel society) states the following are acceptable media for its exhibitions: "Pastels, including Oil pastel, Charcoal, Pencil, Conté, Sanguine, or any dry media". The emphasis appears to be on "dry media" but the debate continues. 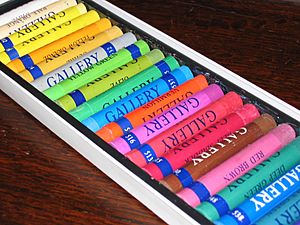 In order to create hard and soft pastels, pigments are ground into a paste with water and a gum binder and then rolled or pressed into sticks. The name "pastel" comes from Medieval Latin pastellum, woad paste, from Late Latin pastellus, paste. The French word pastel first appeared in 1662.

Most brands produce gradations of a color, the original pigment of which tends to be dark, from pure pigment to near-white by mixing in differing quantities of chalk. This mixing of pigments with chalks is the origin of the word "pastel" in reference to "pale color" as it is commonly used in cosmetic and fashion venues.

A pastel is made by letting the sticks move over an abrasive ground, leaving color on the grain of the paper, sandboard, canvas etc. When fully covered with pastel, the work is called a pastel painting; when not, a pastel sketch or drawing. Pastel paintings, being made with a medium that has the highest pigment concentration of all, reflect light without darkening refraction, allowing for very saturated colors.

Pastel supports need to provide a "tooth" for the pastel to adhere and hold the pigment in place. Supports include: 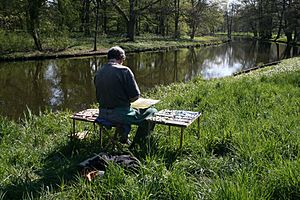 Pastels can be used to produce a permanent work of art if the artist meets appropriate archival considerations. This means:

For these reasons, some pastelists avoid the use of a fixative except in cases where the pastel has been overworked so much that the surface will no longer hold any more pastel. The fixative will restore the "tooth" and more pastel can be applied on top. It is the tooth of the painting surface that holds the pastels, not a fixative. Abrasive supports avoid or minimize the need to apply further fixative in this way. SpectraFix, a modern casein fixative available premixed in a pump misting bottle or as concentrate to be mixed with alcohol, is not toxic and does not darken or dull pastel colors. However, SpectraFix takes some practice to use because it's applied with a pump misting bottle instead of an aerosol spray can. It is easy to use too much SpectraFix and leave puddles of liquid that may dissolve passages of color; also it takes a little longer to dry than conventional spray fixatives between light layers.

Glassine (paper) is used by artists to protect artwork which is being stored or transported. Some good quality books of pastel papers also include glassine to separate pages. 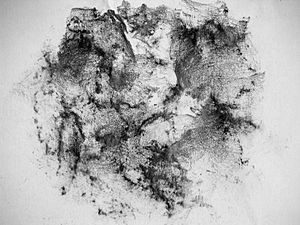 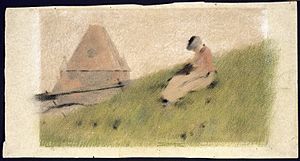 On the Cliff by Theodore Robinson, 1887. A warm beige paper is used as a colored ground to enhance the pink colors. The rough textured ground provided by the paper also enhances the impressionistic style of the pastel work.

Pastel techniques can be challenging since the medium is mixed and blended directly on the working surface, and unlike paint, colors cannot be tested on a palette before applying to the surface. Pastel errors cannot be covered the way a paint error can be painted out. Experimentation with the pastel medium on a small scale in order to learn various techniques gives the user a better command over a larger composition.

Pastels have some techniques in common with painting, such as blending, masking, building up layers of color, adding accents and highlighting, and shading. Some techniques are characteristic of both pastels and sketching mediums such as charcoal and lead, for example, hatching and crosshatching, and gradation. Other techniques are particular to the pastel medium.

Pastels are a dry medium and produce a great deal of dust, which can cause respiratory irritation. More seriously, pastels use the same pigments as artists' paints, many of which are toxic. For example, exposure to cadmium pigments, which are common and popular bright yellows, oranges, and reds, can lead to cadmium poisoning. Pastel artists, who use the pigments without a strong painting binder, are especially susceptible to such poisoning. For this reason, many modern pastels are made using substitutions for cadmium, chromium, and other toxic pigments, while retaining the traditional pigment names.

The manufacture of pastels originated in the 15th century. The pastel medium was mentioned by Leonardo da Vinci, who learned of it from the French artist Jean Perréal after that artist's arrival in Milan in 1499. Pastel was sometimes used as a medium for preparatory studies by 16th-century artists, notably Federico Barocci. The first French artist to specialize in pastel portraits was Joseph Vivien.

During the 18th century the medium became fashionable for portrait painting, sometimes in a mixed technique with gouache. Pastel was an important medium for artists such as Jean-Baptiste Perronneau, Maurice Quentin de La Tour (who never painted in oils), and Rosalba Carriera. The pastel still life paintings and portraits of Jean-Baptiste-Siméon Chardin are much admired, as are the works of the Swiss-French artist Jean-Étienne Liotard. In 18th-century England the outstanding practitioner was John Russell. In Colonial America, John Singleton Copley used pastel occasionally for portraits.

In France, pastel briefly became unpopular during and after the Revolution, as the medium was identified with the frivolity of the Ancien Régime. By the mid-19th century, French artists such as Eugène Delacroix and especially Jean-François Millet were again making significant use of pastel. Their countryman Édouard Manet painted a number of portraits in pastel on canvas, an unconventional ground for the medium. Edgar Degas was an innovator in pastel technique, and used it with an almost expressionist vigor after about 1885, when it became his primary medium. Odilon Redon produced a large body of works in pastel.

James Abbott McNeill Whistler produced a quantity of pastels around 1880, including a body of work relating to Venice, and this probably contributed to a growing enthusiasm for the medium in the United States. In particular, he demonstrated how few strokes were required to evoke a place or an atmosphere. Mary Cassatt, an American artist active in France, introduced the Impressionists and pastel to her friends in Philadelphia and Washington.

According to the Metropolitan Museum of Art's Time Line of Art History: Nineteenth Century American Drawings:

[Among American artists] by far the most graphic and, at the same time, most painterly wielding of pastel was Cassatt's in Europe, where she had worked closely in the medium with her mentor Edgar Degas and vigorously captured familial moments such as the one revealed in Mother Playing with Child.

On the East Coast of the United States, the Society of Painters in Pastel was founded in 1883 by William Merritt Chase, Robert Blum, and others. The Pastellists, led by Leon Dabo, was organized in New York in late 1910 and included among its ranks Everett Shinn and Arthur Bowen Davies. On the American West Coast the influential artist and teacher Pedro Joseph de Lemos, who served as Chief Administrator of the San Francisco Art Institute and Director of the Stanford University Museum and Art Gallery, popularized pastels in regional exhibitions. Beginning in 1919 de Lemos published a series of articles on “painting” with pastels, which included such notable innovations as allowing the intensity of light on the subject to determine the distinct color of laid paper and the use of special optics for making “night sketches” in both urban and rural settings. His night scenes, which were often called “dreamscapes” in the press, were influenced by French Symbolism, and especially Odilon Redon.

Pastels have been favored by many modern artists because of the medium's broad range of bright colors. Modern notable artists who have worked extensively in pastels include Fernando Botero, Francesco Clemente, Daniel Greene, Wolf Kahn, and R. B. Kitaj.

All content from Kiddle encyclopedia articles (including the article images and facts) can be freely used under Attribution-ShareAlike license, unless stated otherwise. Cite this article:
Pastel Facts for Kids. Kiddle Encyclopedia.