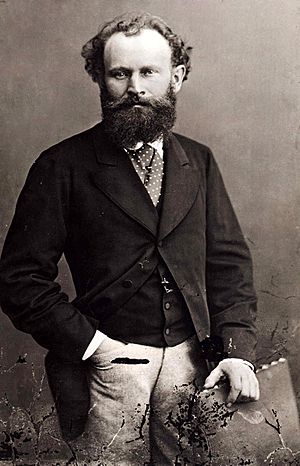 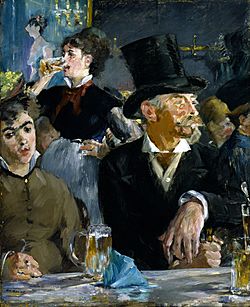 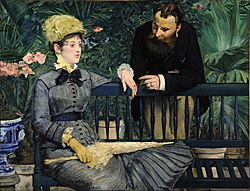 Édouard Manet (pronounced edwaʁ manɛ in French), 23 January 1832 – 30 April 1883, was a French Impressionist painter. He was one of the first painters of the 19th century to paint subjects of everyday life in the modern world. This made him very important for modern painting, especially for the change from Realism to Impressionism.

Édouard Manet was born in Paris on 23 January 1832, to a wealthy family. As he grew up, his uncle encouraged him to paint and draw, but his father wanted him to join the navy. Eventually he was allowed to be trained as a painter. Manet worked from 1850 to 1856 in the studio of the academic painter Thomas Couture a painter of large historical paintings. In his spare time he copied the old masters in the Louvre.

While he was a student he visited Germany, Italy, and the Netherlands, looking at the paintings of Renaissance and Baroque masters such as Frans Hals, and Spanish painters such as Diego Velázquez and Goya.

In 1856, Manet opened his own studio. One of the best known French painters of that time was Gustave Courbet who painted in a style known as Realism. Courbet, in his pictures, tried to show the life of the poor working people of the farms and villages. Manet began to paint beggars, singers and people in cafes. His style was not like Courbet's because he used large brushstrokes without much detail. Courbet's paintings were dark and somber because he painted all his canvases brown before he put the figures in. Manet's paintings were brighter and lighter, with lots of white paint and often small parts painted in bright blue and red

In 1863 Manet married Suzanne Leenhoff, who had been employed by his father to teach piano to Manet and his younger brother Eugene. Suzanne had an eleven year old son, Leon Koella Leenhoff who often posed as a model for Manet's paintings. 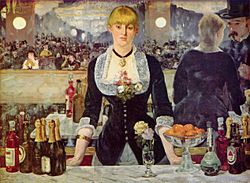 A Bar at the Folies-Bergère, 1882, one of Manet's last paintings

In 1874 thirty Impressionist artists held their first exhibition. The main artists who are called "Impressionists" include Claude Monet, Auguste Renoir, Paul Cézanne, Camille Pissarro, Alfred Sisley, Edgar Degas and Berthe Morisot. Manet became friendly with Berthe Morisot, who later married his brother Eugene Manet. Manet encouraged Morisot with her painting. Morisot, in turn, encouraged Manet to paint outdoors, in the way that Monet and the other Impressionist painters did. Monet painted some landscapes, seascapes and city scenes in the Impressionist style. However, most of his paintings are "figurative" (they are pictures of people).

Manet's paintings usually show people going about their ordinary lives. They show people at home and at work, or out and enjoying themselves. One painting is very different. It is a terrible scene showing the execution of the Emperor Maximillian of Mexico by a firing squad.

All content from Kiddle encyclopedia articles (including the article images and facts) can be freely used under Attribution-ShareAlike license, unless stated otherwise. Cite this article:
Édouard Manet Facts for Kids. Kiddle Encyclopedia.