He is considered one of the greatest artists of the 20th century. He is best known as the co-founder of cubism. A work of art is cubist when the artist opts to break up objects and re-assemble them in abstract and geometric form. Picasso could draw and paint when he was very young. His first word was lápiz, the Spanish word for "pencil".

Perhaps his most famous painting is Guernica, which shows the horrors of war after the bombing of the town of Guernica.

Picasso had four children with three women. He died of heart failure in Mougins, France, on 8 April 1973. 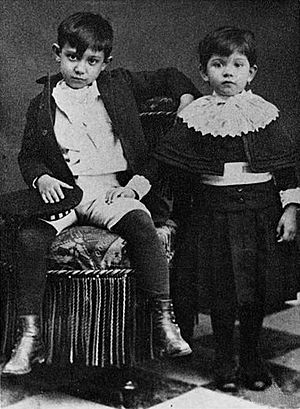 Pablo Picasso with his sister Lola, 1889

Pablo Picasso was born as the son of the painter and teacher José Ruiz Blasco and his wife María Picasso López. His birthplace was Málaga in Spain. In his first years, until 1898, he used both, the name of his father and his mother to sign pictures. Since around 1901, he only used his mother's one. At the age of eight, Picasso created his first oil painting called "The Picador". In 1891, Pablo moved with his family to Northern Spain, where his father taught at the Instituto da Guarda. One year later, Pablo studied at this institute. Pablo's father was his teacher at this time. In 1896, he started to attend the art school in Barcelona after passing the entrance examination. One year later in 1897, Picasso started to study at the Academia San Fernando in Madrid. In 1898. he left the academy and went to a rest to Horta de Ebro. In 1900, he published his first illustrations in a newspaper in Barcelona. This exhibition had over 50 portraits.

Beginning of the Career

Picasso also made in 1900 his first travel to Paris. There, he lived with Max Jacob, a poet and journalist. When Max was working during the day, Pablo slept and when Max slept in the night, Pablo worked. Picasso had to burn his paintings to keep himself warm. Lovers in the Street and Moulin de la Galette are examples of his work in Paris. Both pictures were painted in 1900.

He went back to Madrid in 1901. There, he worked for a newspaper called Arte Joven. He was responsible for the illustration. He shortened his signature in this time to "Picasso" only rather than "Pablo Ruiz y Picasso". At the same time, his so called Blue Period started. Picasso made three trips to Paris. In 1904, he settled there. The Blue Period ended in 1904. The Soup and Crouching Woman are two examples of paintings from Picasso. Both were painted in 1903.

In 1905, Picasso made a trip to Holland. In the same year, Pablo's "Rosa Period" started. During this period, Picasso mostly painted circus motives. Girl Balancing on a Ball and The Actor are two paintings from this time. Both were painted in 1905 at the beginning of the Rosa Period. The end of the period is dated to 1907.

The next years in Picasso's life are called Cubism. The start of this period is dated to the year 1909 and ended around 1912. This period was inspired by the French painter Paul Cezanne. This period is called Cubism because he often painted cubes. During this time, Pablo Picasso preferred to paint musical instruments and still-life objects. He also painted his friends.

During the First World War

From 1912 to 1919 was Picasso's so called Synthetic Cubism Period. During this time, he started to use collages in his paintings. His works from this time are called papiers collés. He has spent the his time during the First World War in Rome. In 1914, Picasso spent the whole summer in Avignon. In 1915, he started to paint realistic again. At the end of the same year, his wife Eva died. During the World War, he also worked as a designer for Sergey Diaghilev.

In 1917, Picasso met Olga Koklova, a Russian dancer. In the same year, he painted several realistic portraits of her and their friends. One year later, he married her. The last summer of the wartime, Picasso and his wife spent in Barcelona and Biarritz.

After the First World War 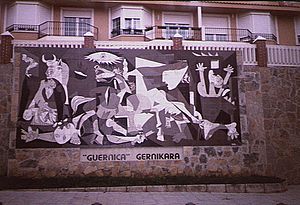 In 1921, Picasso's son Paul was born. Due to this occasion, he painted several paintings with his wife and his son on it. Paul was Picasso's only legitimate son. In 1925, he took part in the first Surrealist exhibition in Paris. Between 1924 and 1926, Picasso preferred to paint abstract still lifes. in 1927, he got known to Marie-Thérèse Walter. She became his model and mistress. In 1928, he started a new period. He began to make sculptural works. In 1931, he left his wife and moved with his mistress to Boisgeloup. There they lived in a country home. There, Picasso had a room for his sculptures only. Since 1932, he used Marie-Thérèse as model. During a travel in Spain, he started to use the bullfight as a new topic of his paintings. In 1935, Picasso's daughter, Maïa, was born. At this time, he got divorced from his wife because of the birth of Maïa. In 1936, Picasso got a job as director of the Prado-Museum in Madrid. During this time, the Spanish Civil War started. German bombs fall on Guernica in Spain on 26 April 1937. Picasso used this impact to paint one of his most famous paintings, Guernica. This painting was completed in about 2 months. It was first shown in the Spanish Pavilion in Paris in 1937.

During the Second World War

In 1938, Picasso's mother died. After the Second World War started on 1 September 1939, Picasso returned to Paris. Around 1943, he got known to the painter Françoise Gilot. She bore to him one son and one daughter. In 1941, he wrote his first play "Le désir attrapé par la queue" (English: Desire Caught by the Tail). It was first shown in 1944. Also in 1944, Picasso joined the communist Party. Picasso spent almost the full war time in Paris.

All content from Kiddle encyclopedia articles (including the article images and facts) can be freely used under Attribution-ShareAlike license, unless stated otherwise. Cite this article:
Pablo Picasso Facts for Kids. Kiddle Encyclopedia.