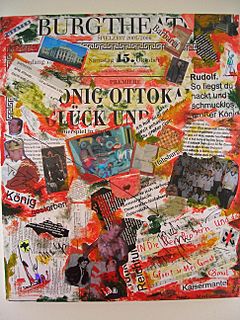 A collage composed of magazine articles and pictures

Collage is regarded as a work of visual arts made from an assemblage of different forms, thus creating a new whole. Use of this technique made its dramatic appearance among oil paintings in the early 20th century as an art form of groundbreaking novelty.

There are many different mediums of Collage, some are listed below:

An artistic collage work may include newspaper clippings, ribbons, bits of colored or hand-made papers, portions of other artwork, photographs, and such, glued to a piece of paper or canvas.

Techniques of collage were first used at the time of the invention of paper in China around 200 BC. The use of collage, however, remained very limited until the 10th century in Japan, when calligraphers began to apply glued paper, using texts on surfaces, when writing their poems.

The technique of collage appeared in medieval Europe during the 13th century. Gold leaf panels started to be applied in Gothic cathedrals around the 15th and 16th centuries. Gemstones and other precious metals were applied to religious images, icons, and also, to coats of arms.

The term collage derives from the French "coller" meaning "glue". This term was coined by both Georges Braque and Pablo Picasso in the beginning of the 20th century when collage became a distinctive part of modern art.

All content from Kiddle encyclopedia articles (including the article images and facts) can be freely used under Attribution-ShareAlike license, unless stated otherwise. Cite this article:
Collage Facts for Kids. Kiddle Encyclopedia.