Coat of arms facts for kids 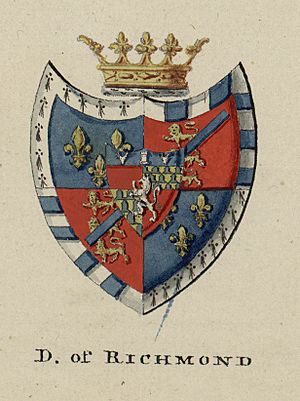 A coat of arms is a unique design painted on a shield. These designs may be inherited, meaning that they pass from a father to his children. In the Middle Ages, these designs were shown on real shields, but today they are usually only drawn or painted on the paper that makes them legal which is called a grant of arms. The grant of arms is usually allowed only when it is given by the government of a country or its agent. In England, this is called the College of Arms and in Scotland is called the Lord Lyon.

Coats of arms are normally issued for real people but nowadays lots of countries and businesses also have coats of arms. Each symbol on the coat of arms will represent something that has an important meaning to that person, country or company. 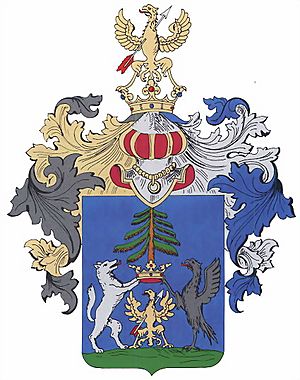 Coat of Arms of Liptov County in Slovakia

The ancient Greek hoplites used individual insignia on their shields. The ancient Romans used similar insignia on their shields, but these identified military units. The first evidence of medieval coats of arms has been attributed to the 11th century Bayeux Tapestry in which some of the combatants carry shields painted with crosses. However, that heraldic interpretation remains controversial.

Coats of arms came into general use by feudal lords and knights in battle in the 12th century. By the 13th century, arms had spread beyond their initial battlefield use to become a flag or emblem for families in the higher social classes of Europe, inherited from one generation to the next. Exactly who had a right to use arms, by law or social convention, varied to some degree between countries. In the German-speaking regions both the aristocracy and "burghers" (non-noble free citizens) used arms, while in most of the rest of Europe they were limited to the aristocracy. The use of arms spread to the clergy, to towns as civic identifiers, and to royally chartered organizations such as universities and trading companies. Flags developed from coats of arms, and the arts of vexillology and heraldry are closely related. The coats of arms granted to commercial companies are a major source of the modern logo. 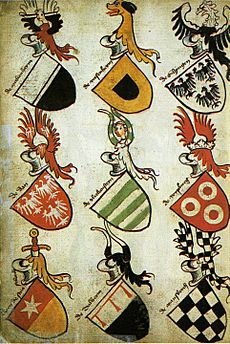 The German Hyghalmen Roll, c. late 15th century, illustrates the German practice of thematic repetition from the arms in the crest

In the heraldic traditions of England and Scotland, an individual, rather than a family, had a coat of arms. In those traditions coats of arms are legal property transmitted from father to son; wives and daughters could also bear arms modified to indicate their relation to the current holder of the arms. Undifferenced arms are used only by one person at any given time. Other descendants of the original bearer could bear the ancestral arms only with some difference: usually a colour change or the addition of a distinguishing charge. One such charge is the label, which in British usage (outside the Royal Family) is now always the mark of an heir apparent or (in Scotland) an heir presumptive. Because of their importance in identification, particularly in seals on legal documents, the use of arms was strictly regulated; few countries continue in this today. This has been carried out by heralds and the study of coats of arms is therefore called "heraldry". In time, the use of arms spread from military entities to educational institutes, and other establishments. 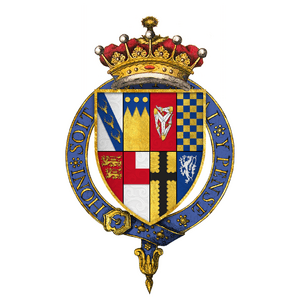 In his book, The Visual Culture of Violence in the Late Middle Ages, Valentin Groebner argues that the images composed on coats of arms are in many cases designed to convey a feeling of power and strength, often in military terms. The author Helen Stuart argues that some coats of arms were a form of corporate logo. Museums on medieval armoury also point out that as emblems they may be viewed as precursors to the corporate logos of modern society, used for group identity formation.

When knights were encased in armor that no means of identifying them was left, the practice was introduced of painting their insignia of honor on their shield as an easy method of distinguishing them. Originally these were granted only to individuals, but were afterward made hereditary in England by King Richard I, during his crusade to the Holy Land.

All content from Kiddle encyclopedia articles (including the article images and facts) can be freely used under Attribution-ShareAlike license, unless stated otherwise. Cite this article:
Coat of arms Facts for Kids. Kiddle Encyclopedia.