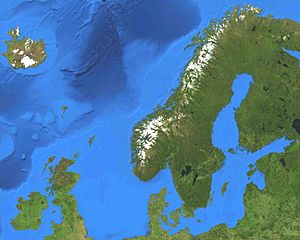 Satellite map of the Nordic countries.

Nordic countries have long, cold winters with warm days in the summer, but only a small part of Northern Norway and approximately half of Iceland is arctic.

Of late, many Nordic countries have been facing issues with immigration, mainly Sweden. Their relaxed immigration policy has allowed many Middle Easterners to seek refuge from their war-torn countries there.

All content from Kiddle encyclopedia articles (including the article images and facts) can be freely used under Attribution-ShareAlike license, unless stated otherwise. Cite this article:
Nordic countries Facts for Kids. Kiddle Encyclopedia.