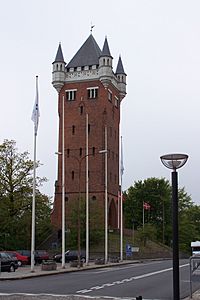 Esbjerg is a city in Denmark, on the peninsula Jutland.

It has about 82,000 inhabitants and is the 5th largest city of Denmark. The growing began in the 1860s, because Denmark lost its North Sea harbors to Prussia in the Danish-Prussian-Austrian war. The new harbor was built in Esbjerg.

All content from Kiddle encyclopedia articles (including the article images and facts) can be freely used under Attribution-ShareAlike license, unless stated otherwise. Cite this article:
Esbjerg Facts for Kids. Kiddle Encyclopedia.