Copenhagen is the capital of Denmark and the country's largest city. The city has a population of 763,908 (as of December 2016). Copenhagen is the seat of the national parliament, the government, and the monarchy.

The original designation for the city, from which the contemporary Danish name is derived, was Kjøbmandehavn, "merchants' harbor". The English name for the city is derived from its German name, Kopenhagen. The element hafnium is named after the city's Latin name, Hafnia.

Copenhagen was one of the three last Danish municipalities not belonging to a County— the others being Frederiksberg (an enclave within Copenhagen itself) and Bornholm. On 1 January 2007, the municipality lost its county privileges and became part of Region Hovedstaden (i.e. the Copenhagen Capital Region).

Copenhagen was founded around year 1000 by Sweyn I Forkbeard (Svend Tveskæg) and his son Canute the Great (Knud den Store). It was only a fishing village by the name of "Havn" (harbour) until the middle of the 12th century when it grew in importance after coming into the possession of the Bishop Absalon, who fortified it in 1167. The excellent harbour encouraged Copenhagen's growth until it became an important centre of commerce (hence its name - the first part of the word denoting commerce in Danish language). It was repeatedly attacked by the Hanseatic League as the Germans took notice. In 1254, it received its charter as a city under Bishop Jakob Erlandsen. 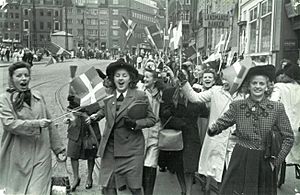 People celebrating the liberation of Denmark at Strøget in Copenhagen, 5 May 1945. Germany surrendered two days later

During 1658-59 it withstood a severe siege by the Swedes under Charles X. In 1801 a British fleet under Admiral Parker fought a major battle, the Battle of Copenhagen, with the Danish navy in Copenhagen harbour. It was during this battle Lord Nelson famously "put the telescope to the blind eye" in order not to see Admiral Parker's signal to cease fire. When a British expeditionary force bombarded Copenhagen in 1807, to gain control of the Danish navy, the city suffered great damage and hundreds of people were killed.

The reason why the devastation was so great was that Copenhagen relied on an old defence-line rendered virtually useless by the increase in shooting range available to the British. But not until the 1850s were the ramparts of the city opened to allow new housing to be built around the lakes ("Søerne") which bordered the old defence system to the west. This dramatic increase of space was long overdue, not only because the old ramparts were out of date as a defence system, but also because of bad sanitation in the old city.

During World War II Copenhagen was occupied by German troops along with the rest of the country from 9 April 1940 until 4 May 1945. In August 1943, when the government's collaboration with the occupation forces collapsed, several ships were sunk in Copenhagen Harbour by the Royal Danish Navy to prevent them being used by the Germans.

The city has grown greatly since the war, in the seventies using the so-called five-finger-plan of commuter trainlines to surrounding towns and suburbs.

Kongens Nytorv in the Wintertime

Since the summer 2000, the cities of Copenhagen and Malmö have been connected by a toll bridge/tunnel (Øresund Bridge), which allows both rail and road passengers to cross. It was inaugurated in July 2000 by King Carl XVI Gustaf of Sweden and Queen Margrethe II of Denmark. As a result, Copenhagen has become the centre of a larger metropolitan area which spans both nations. The construction of the bridge has led to a large number of changes to the public transportation system and the extensive redevelopment of Amager, south of the main city.

Copenhagen is located on the eastern shore of the island of Zealand (Sjælland) and partly on the island of Amager. Copenhagen faces to the east the Øresund, the strait of water that separates Denmark from Sweden, and that connects the North Sea with the Baltic Sea. On the Swedish side of the sound directly across from Copenhagen, lie the towns of Malmö and Landskrona.

Copenhagen is also a part of the Øresund region, which consists of the eastern part of Zealand in Denmark and the western part of Scania in Sweden.

The city itself is divided into 15 administrative, statistical and tax districts (bydele):

Danish newspapers rank Copenhagen as one of the world's best cities in which to live, despite the high cost of living.

Strøget, a pedestrian shopping street in central Copenhagen was inaugurated in 1961. Copenhagen's extensive pedestrian network has been developed over the last 40 years through the work of architect and professor Jan Gehl. It is a very popular place for shopping.

The Copenhagen Jazz Festival is a popular annual event that is the result of a significant jazz scene having existed for many years. It developed significantly when a number of American jazz musicians such as Ben Webster, Thad Jones, Richard Boone, Ernie Wilkins, Kenny Drew, Ed Thigpen, Bob Rockwell and others such as rock guitarist Link Wray came to Copenhagen beginning in the 1960s.

For free entertainment one can stroll along Strøget, especially between Nytorv and Højbro Plads, which in the late afternoon and evening is a bit like an impromptu three-ring circus with musicians, magicians, jugglers and other street performers.

Copenhagen has a wide variety of sport teams. Denmark's two leading football teams, Brøndby IF and FC København, are based in Copenhagen and its suburbs. FC København play at Parken in Østerbro, Copenhagen. Brøndby IF play at Brøndby Stadion outside of the municipality of Copenhagen.

There is both a men's and a women's handball team, and both teams play in the highest league. Both of the handball teams are owned by FC København and have the same name and logo. They were formerly known as FIF.

Rugby is also played in the Danish capital with teams such as CSR-Nanok, Copenhagen Scrum, Exiles, Froggies and Rugbyklubben Speed.

The Danish Australian Football League, based in Copenhagen is the largest Australian rules football competition outside of the English speaking world.

Copenhagen is also home to a number of Denmark's 40-odd cricket clubs. Although Denmark has been an associate member of the International Cricket Council since 1966, the sport is not taught much in schools, and Danish cricket competes unfavourably with the much more widely followed sport of football for players, facilities, media attention and spectators.

Copenhagen is also home to three prominent paintball teams, the Copenhagen Ducks, The Ugly Ducklings and the Copenhagen Berserks. Because of paintball's relative popularity in Scandinavia, these teams are well-known throughout the globe, despite Denmark's small size.

Copenhagen offers a great variety of fine restaurants and it is possible to find modest eateries with open sandwiches (called "smørrebrød"), which is the traditional and most known dish. Most restaurants, though, serve international dishes.

Also, Copenhagen is known for the hotdog stands found throughout the city. The city is also home to many fine bakeries and pastry shops.

The city boasts an impressive 10 Michelin star restaurants. Restaurant Noma (Nordisk Madhus) has currently been voted the 33. best restaurant in the world..

Lately, immigration from the Middle East, Turkey and Arabian countries has made fast food dishes like kebab and falafel as popular as more traditional Danish fast food. 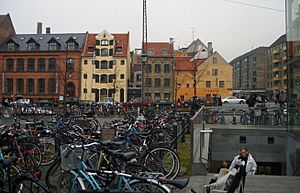 The public transportation system of Copenhagen consists of commuter trains (called "S-Trains" (S-tog)), buses, and a metro. The S-trains form the basis of the transportation network, stretching to most areas of metropolitan Copenhagen, with their main hub at Copenhagen Central Station (København H). Some regional trains supplement the S-train services with lines extending further such as to the Copenhagen Airport, Elsinore, and Malmö. The entire system is operated by Trafikselskabet Movia, covering all of east Denmark, 45 municipalities in total, not including Bornholm.

Discount cards, known as punch cards, as well as period cards are available. Ticket prices are high and have increased substantially in recent years leading to a decrease in passenger numbers. In fact the percentage of trips made on public transportation in Copenhagen is quite low by northern European standards.

An extensive road system is also in place, and the city's bicycle paths are extensive and well-used. The city provides public bicycles which can be found throughout the downtown area and used with a returnable deposit of 20 kroner. Bicycle paths are often separated from the main traffic lanes and sometimes have their own signal systems. Copenhagen is known as one of the most bicycle-friendly cities in the world , and is a center of bicycle culture.

Places of note in or near Copenhagen

Børsen - the former Stock Exchange building with Christiansborg to the right 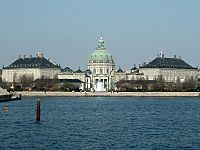 All content from Kiddle encyclopedia articles (including the article images and facts) can be freely used under Attribution-ShareAlike license, unless stated otherwise. Cite this article:
Copenhagen Facts for Kids. Kiddle Encyclopedia.