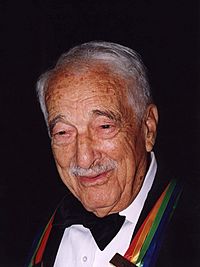 Børge Rosenbaum (3 January 1909 – 23 December 2000), known professionally as Victor Borge ( BOR-gə), was a Danish-American comedian, conductor, and pianist. He was known for his radio and television works in the United States and Europe.

Borge was known as "The Clown Prince of Denmark". His best known work was in Comedy in Music, which became the longest running one-man show in the history of theater with 849 performances, a feat which placed it in the Guinness Book of World Records. He was born in Copenhagen.

In 1999, he received the Kennedy Center Honors.

Borge died on 23 December 2000 in his sleep in Greenwich, Connecticut following a concert, aged 91.

All content from Kiddle encyclopedia articles (including the article images and facts) can be freely used under Attribution-ShareAlike license, unless stated otherwise. Cite this article:
Victor Borge Facts for Kids. Kiddle Encyclopedia.