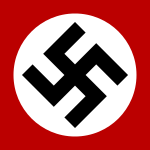 Swastika, symbol of the Nazi Party

Nazism (or National Socialism; German: Nationalsozialismus) is a set of political beliefs associated with the Nazi Party of Germany. It started in the 1920s. Party gained power in 1933, starting the Third Reich. They lasted in Germany until 1945, at the end of World War II.

To implement the racist ideas, in 1935 the Nuremberg Race Laws banned non-Aryans and political opponents of the Nazis from the civil-service. They also forbid any relationships between 'Aryan' and 'non-Aryan' persons.

The Nazis sent millions of Jews, Roma and other people to concentration camps and death camps, where they were killed. These killings are now called the Holocaust.

The word Nazi is short for Nationalsozialist (supporter of the Nationalsozialistische Deutsche Arbeiterpartei) in the German language. This means "National Socialist German Workers' Party".

Adolf Hitler, the leader of Nazi Germany, wrote a book called Mein Kampf ("My Struggle"). The book said that all of Germany's problems happened because Jews were making plans to hurt the country. He also said that Jewish and communist politicians planned the Armistice of 1918 that ended World War I, and allowed Germany to agree to pay huge amounts of money and goods (reparations).

On the night of the 27 February 1933 and 28 February 1933, someone set the Reichstag building on fire. This was the building where the German Parliament held their meetings. The Nazis blamed the communists. Opponents of the Nazis said that the Nazis themselves had done it to come to power. On the very same day, an emergency law called Reichstagsbrandverordnung was passed. The government claimed it was to protect the state from people trying to hurt the country. With this law, most of the civil rights of the Weimar Republic did not count any longer. The Nazis used this against the other political parties. Members of the communist and social-democratic parties were put into prison or killed.

The Nazis became the biggest party in the parliament. By 1934, they managed to make all other parties illegal. Democracy was replaced with a dictatorship. Adolf Hitler became leader (Führer) of Germany. 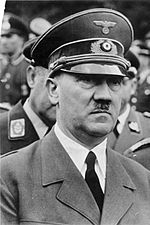 Nazi was Hitler's standard during his run as President of Germany

As the German leader (Führer) of Nazi Germany, Hitler began moving Nazi armies into neighboring countries. When Germany attacked Poland, World War II started. Western countries like France, Belgium, and the Netherlands were occupied and to be treated by Germany as colonies. However, in Eastern countries, such as Poland and the Soviet Union, the Nazis planned to kill or enslave the Slavic peoples, so that German settlers could take their land.

In the Holocaust, millions of Jews, as well as Roma people (also called "Gypsies"), people with disabilities, homosexuals, political opponents, and many other people were sent to concentration camps and death camps in Poland and Germany. The Nazis killed millions of these people at the concentration camps with poison gas. The Nazis also killed millions of people in these groups by forcing them to do slave labor without giving them much food or clothing. In total, 17 million people died, 6 million of them Jews.

Victory of the Allies

In 1945, the Soviet Union took over Berlin after beating the German army in Russia. The Soviet Red Army met the American and British armies, who had fought right across Germany after invading Nazi Europe from Normandy in France on June 6,1944. The Nazis lost because the Allies had many more soldiers and more money than them.

During the invasion of Berlin, Hitler may have shot himself in a bunker with his new wife, Eva Braun. Other Nazis also killed themselves, including Joseph Goebbels just one day after Hitler named him as his successor. The Nazis surrendered after the Red Army captured Berlin.

Trial for the Nazis

After the war, the Allied governments, namely the United States, Britain, and the Soviet Union, held trials for the Nazi leaders. These trials were held in Nuremberg, in Germany. For this reason, these trials were called "the Nuremberg Trials." The Allied leaders accused the Nazi leaders of war crimes and crimes against humanity, including murdering millions of people (in the Holocaust), of starting wars, of conspiracy, and belonging to illegal organizations like the Schutzstaffel (SS). Most Nazi leaders were found guilty by the court, and they were sent to jail or executed by hanging.

Nazis after the war

There has not been a Nazi state since 1945, but there are still people who believe in those ideas. These people are often called neo-Nazis, (which means new-Nazis). Here are some examples of modern Nazi ideas:

After the war, laws were made in Germany and other countries, especially countries in Europe, that make it illegal to say the Holocaust never happened. Sometimes they also ban questioning the number of people affected by it, which is saying that not so many people were killed as most people think who wrote this? There has been some controversy over whether this affects people's free speech. Certain countries, such as Germany, Austria, and France also ban the use of Nazi symbols and it is also banned to make a nazi pledge position on a popular media source to stop Nazis from using them.

All content from Kiddle encyclopedia articles (including the article images and facts) can be freely used under Attribution-ShareAlike license, unless stated otherwise. Cite this article:
Nazism Facts for Kids. Kiddle Encyclopedia.