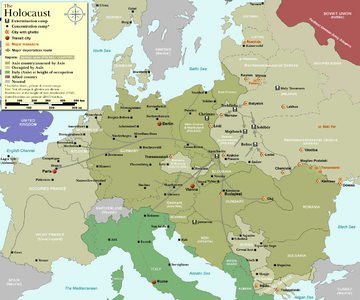 Mass deportations: the routes to the death camps

Extermination camps (death camps) were built by Nazi Germany during World War II. The goal of the death camps was to kill millions of people as quickly as possible. At the death camps, people were murdered mostly by being given poison gas in gas chambers. However, the Nazis also killed many people in other ways at the death camps. They killed some in mass executions (for example, by shooting many people at once). They killed others through "extermination through labor." This was by making prisoners do very hard forced labor without giving them the food, medical care, or other basic things they needed to survive. Many other people died at the death camps from starvation, illness, and freezing to death.

The Nazis sent many different kinds of people to the death camps. However, about 90% of the people killed in the death camps were Jewish. Nazi Germany wanted to 'exterminate' the Jewish people (they wanted to kill all of the Jews, so they would not exist any more). This plan was called the Final Solution. It is now called the Holocaust.

Some extermination camps were liberated (taken over and freed) by Soviet soldiers before the Nazis could destroy evidence of their war crimes. For example, Majdanek was captured nearly intact before the Nazis were able to destroy very much. This happened because the Soviet Red Army got to the camp very quickly, which prevented the SS from destroying most of the camp.

All content from Kiddle encyclopedia articles (including the article images and facts) can be freely used under Attribution-ShareAlike license, unless stated otherwise. Cite this article:
Extermination camp Facts for Kids. Kiddle Encyclopedia.