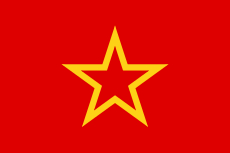 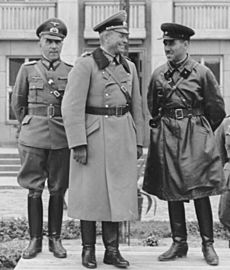 Common parade of Wehrmacht and Red Army in Brest at the end of the Invasion of Poland. At the center Major General Heinz Guderian and Brigadier Semyon Krivoshein, 1939

The Red Army was the army of the Bolsheviks led by Leon Trotsky in the Russian Civil War. Later it became the army of the Union of Soviet Socialist Republics. It was the name used mainly before and during World War II. After the war it was renamed as the Soviet Army, although many people still continued to call it the Red Army. Even nowadays some people still nickname the modern Russian Army as the Red Army.

Some later Communist organizations such as the Red Army Faction used the name, and anti-communists sometimes used the name for any left-wing group which they said was trying to promote communism and was paid for by the USSR.

All content from Kiddle encyclopedia articles (including the article images and facts) can be freely used under Attribution-ShareAlike license, unless stated otherwise. Cite this article:
Red Army Facts for Kids. Kiddle Encyclopedia.