An illustration of the random way gas molecules move, without being attached to each other.

A gas mixture contains a mix of any of the above types, for example air which is 78% nitrogen, 20% oxygen and 2% argon and carbon dioxide.

Poison gases were used as chemical weapons in World War I but were later banned. 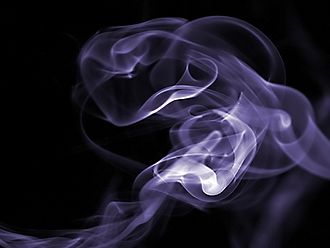 Drifting smoke particles provide clues to the movement of the surrounding gas.

All gases can flow, like liquids. This means the molecules move about independently of each other. Most gases are colourless, like hydrogen. Gas particles will spread about, or diffuse, in order to fill all the space in any container such as a bottle or a room. Compared to liquids and solids, gases have a very low density and viscosity. We cannot directly see most gases since they aren't coloured. However it is possible to measure their density, volume, temperature and pressure.

Pressure is the measure of how much pushing force something is putting on another object. In a gas, this is usually the gas pushing on the container of the object or, if the gas is heavy, something inside the gas. Pressure is measured in pascals. Because of Newton's third law, we can change the pressure of a gas by putting force on the object containing it. For example squeezing a bottle with air inside pressurises (gives more pressure) to the air inside.

The temperature of a gas is how hot or cold it is. In physics it is usually measured in kelvins although degrees Celsius are more used elsewhere. In a gas, the average velocity (how fast they move) of the molecules is related to the temperature. The faster the gas molecules are moving, the more they collide, or smash into each other. These collisions release energy, which in a gas comes in the form of heat. Conversely if the temperature around the gas becomes hotter then the gas particles will convert the thermal energy to kinetic energy, making them move faster and making the gas hotter. 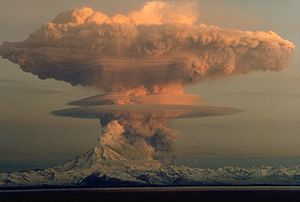 All content from Kiddle encyclopedia articles (including the article images and facts) can be freely used under Attribution-ShareAlike license, unless stated otherwise. Cite this article:
Gas Facts for Kids. Kiddle Encyclopedia.