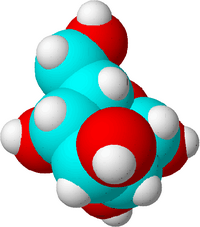 A molecule is the smallest amount of a chemical substance that can exist. If a molecule were split into smaller pieces, it would be a different substance.

In the kinetic theory of gases, the term molecule is often used for any gaseous particle regardless of its composition. According to this definition, noble gas atoms are considered molecules as they are in fact monoatomic molecules.

Bonds can also be broken apart. Since most bonds require energy to form, they also give off energy when they are broken. But before most bonds break, the molecule has to be heated. Then the atoms start to move, and when they move too much, the bond breaks. Molecules that require less energy to break than they give off when broken are called fuels. For example, a candle will just sit there and nothing happens. But when you use a match to light it, it will burn for a long time. The match brings the energy to break the first bonds, which release enough energy to break the bonds below them, until the candle has burned down.

There are also ionic bonds.

All content from Kiddle encyclopedia articles (including the article images and facts) can be freely used under Attribution-ShareAlike license, unless stated otherwise. Cite this article:
Molecule Facts for Kids. Kiddle Encyclopedia.