Glucose is a simple carbohydrate, or sugar. It is one of several kinds of sugars. It is important because cells in an organism use it as a source of energy. Turning glucose into energy is called cellular respiration, which is done inside the cells of a living organism.

Glucose is made by plants in a process called photosynthesis. It can also be made by animals in their liver or kidneys.

Its chemical formula is C6H12O6. This means it has 6 carbon atoms, 12 hydrogen atoms, and 6 oxygen atoms bonded together.

How sugars work, and how glucose can be formed, was studied by a German chemist named Emil Fischer in the 1890s. His work earned him the 1902 Nobel Prize in Chemistry.

Glucose is the most widely used aldohexose in living organisms. One possible explanation for this is that glucose has a lower tendency than other aldohexoses to react nonspecifically with the amine groups of proteins. This reaction—glycation—impairs or destroys the function of many proteins. Glucose's low rate of glycation can be attributed to its having a more stable cyclic form compared to other aldohexoses, which means it spends less time than they do in its reactive open-chain form. The reason for glucose having the most stable cyclic form of all the aldohexoses is that its hydroxy groups (with the exception of the hydroxy group on the anomeric carbon of D-glucose) are in the equatorial position. Many of the long-term complications of diabetes (e.g., blindness, kidney failure, and peripheral neuropathy) are probably due to the glycation of proteins or lipids. In contrast, enzyme-regulated addition of sugars to protein is called glycosylation and is essential for the function of many proteins.

Glucose is a ubiquitous fuel in biology. It is used as an energy source in most organisms, from bacteria to humans, through either aerobic respiration, anaerobic respiration, or fermentation. Glucose is the human body's key source of energy, through aerobic respiration, providing about 3.75 kilocalories (16 kilojoules) of food energy per gram. Breakdown of carbohydrates (e.g., starch) yields mono- and disaccharides, most of which is glucose. Through glycolysis and later in the reactions of the citric acid cycle and oxidative phosphorylation, glucose is oxidized to eventually form carbon dioxide and water, yielding energy mostly in the form of ATP. The insulin reaction, and other mechanisms, regulate the concentration of glucose in the blood.

As a result of its importance in human health, glucose is an analyte in common medical blood tests. Eating or fasting prior to taking a blood sample has an effect on analyses for glucose in the blood; a high fasting glucose blood sugar level may be a sign of prediabetes or diabetes mellitus.

Diabetes is a metabolic disorder where the body is unable to regulate levels of glucose in the blood either because of a lack of insulin in the body or the failure, by cells in the body, to respond properly to insulin. Both of these situations can be caused by persistently high elevations of blood glucose levels, through pancreatic burnout and insulin resistance. 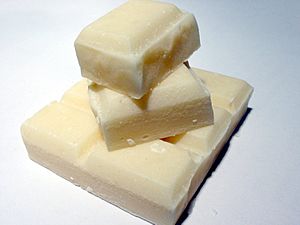 Individuals with diabetes or other conditions that result in low blood sugar often carry small amounts of sugar in various forms. One sugar commonly used is glucose, often in the form of glucose tablets (glucose pressed into a tablet shape sometimes with one or more other ingredients as a binder), hard candy, or sugar packet.

All content from Kiddle encyclopedia articles (including the article images and facts) can be freely used under Attribution-ShareAlike license, unless stated otherwise. Cite this article:
Glucose Facts for Kids. Kiddle Encyclopedia.