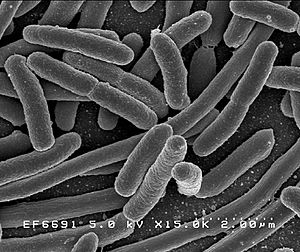 Anaerobic respiration is a form of respiration which does not use oxygen. Elements other than oxygen are used for electron transport. Common replacements for oxygen are nitrates, iron, manganese, sulfates, sulfur, fumaric acid and carbon dioxide. Escherichia coli uses nitrates and fumaric acid for respiration.

For the electron transport chain to work, there must be a final electron acceptor at the end of the chain. This allows electrons to pass through the chain. In aerobic organisms, this final electron acceptor is oxygen. Molecular oxygen is a highly oxidizing agent and so it is an excellent acceptor. In anaerobes, other less-oxidizing substances such as sulfate (SO42−), nitrate (NO3−), sulphur (S) are used. These terminal electron acceptors have smaller reduction potentials than O2, so less energy is released per oxidized molecule. Anaerobic respiration is therefore less efficient than aerobic respiration except, of course, when oxygen pressure is low.

If oxygen is not used at all, the process is called fermentation. Examples of organisms using fermentation are lactic acid bacteria, and yeast. Yeast is a fungi, not bacteria.

The equation for anaerobic respiration is:

All content from Kiddle encyclopedia articles (including the article images and facts) can be freely used under Attribution-ShareAlike license, unless stated otherwise. Cite this article:
Anaerobic respiration Facts for Kids. Kiddle Encyclopedia.