The sulfate or sulphate (see spelling differences) ion is a polyatomic anion with the empirical formula SO2−
4. Sulfate is the spelling recommended by IUPAC, but sulphate is used in British English.

Salts, acid derivatives, and peroxides of sulfate are widely used in industry. Sulfates occur widely in everyday life. Sulfates are salts of sulfuric acid and many are prepared from that acid. 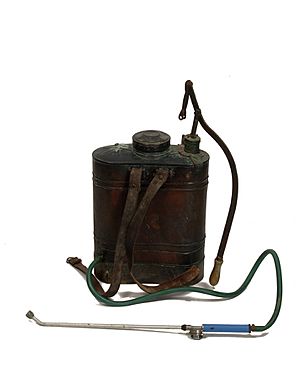 Sulfate-reducing bacteria, some anaerobic microorganisms, such as those living in sediment or near deep sea thermal vents, use the reduction of sulfates coupled with the oxidation of organic compounds or hydrogen as an energy source for chemosynthesis.

Sulfates occur as microscopic particles (aerosols) resulting from fossil fuel and biomass combustion. They increase the acidity of the atmosphere and form acid rain. The anaerobic sulfate-reducing bacteria Desulfovibrio desulfuricans and D. vulgaris can remove the black sulfate crust that often tarnishes buildings. 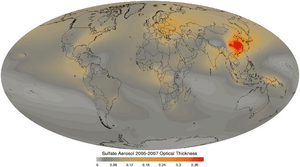 The main direct effect of sulfates on the climate involves the scattering of light, effectively increasing the Earth's albedo. This effect is moderately well understood and leads to a cooling from the negative radiative forcing of about 0.4 W/m2 relative to pre-industrial values, partially offsetting the larger (about 2.4 W/m2) warming effect of greenhouse gases. The effect is strongly spatially non-uniform, being largest downstream of large industrial areas.

The second indirect effect is the further knock-on effects of having more cloud condensation nuclei. It is proposed that these include the suppression of drizzle, increased cloud height, to facilitate cloud formation at low humidities and longer cloud lifetime. Sulfate may also result in changes in the particle size distribution, which can affect the clouds radiative properties in ways that are not fully understood. Chemical effects such as the dissolution of soluble gases and slightly soluble substances, surface tension depression by organic substances and accommodation coefficient changes are also included in the second indirect effect.

The indirect effects probably have a cooling effect, perhaps up to 2 W/m2, although the uncertainty is very large. Sulfates are therefore implicated in global dimming. Sulfate is also the major contributor to stratospheric aerosol formed by oxidation of sulfur dioxide injected into the stratosphere by impulsive volcanoes such as the 1991 eruption of Mount Pinatubo in the Philippines. This aerosol exerts a cooling effect on climate during its 1-2 year lifetime in the stratosphere.

All content from Kiddle encyclopedia articles (including the article images and facts) can be freely used under Attribution-ShareAlike license, unless stated otherwise. Cite this article:
Sulfate Facts for Kids. Kiddle Encyclopedia.