Kids Encyclopedia Facts
Not to be confused with Fertilization. 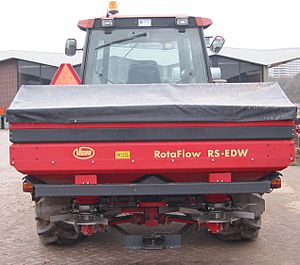 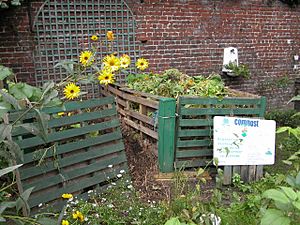 A fertilizer is a chemical that helps plants to grow. It is used to replace the mineral salts taken by plants or removed by rain.

The important things in fertilizer are:

When fertilizers are offered for sale, the percentage of N, P, and K must be written on the bags or boxes, but for historcal reasons, P is shown as %P2O5 and K is shown as %K2O.

In Australia the pecent of elemental sulfur must also be shown. In the UK, the elemental composition (in percentages) may also be shown alongside the mandatory traditional system, provided the numbers are put inside square brackets.

A soil test can tell how much N, P, and K is needed.

All content from Kiddle encyclopedia articles (including the article images and facts) can be freely used under Attribution-ShareAlike license, unless stated otherwise. Cite this article:
Fertilizer Facts for Kids. Kiddle Encyclopedia.