Methane is a hydrocarbon that is a gas at room temperature (20°C). Its molecular formula is CH4, so it has one carbon atom and four hydrogen atoms per molecule. It is often found as the main part of natural gas. Methane is a greenhouse gas 22 times more effective than carbon dioxide. It is also less stable and slowly oxidates by oxygen to carbon dioxide and water.

Methane can be produced by many chemical methods, but usually is found in natural gas and is obtained by fractional distillation, after it is become liquid.

Methane is used in industrial chemical processes and may be transported as a refrigerated liquid (liquefied natural gas, or LNG). While leaks from a refrigerated liquid container are initially heavier than air due to the increased density of the cold gas, the gas at ambient temperature is lighter than air. Gas pipelines distribute large amounts of natural gas, of which methane is the principal component.

Methane is used as a fuel for ovens, homes, water heaters, kilns, automobiles, turbines, and other things. Activated carbon is used to store methane.

Methane is important for electricity generation by burning it as a fuel in a gas turbine or steam generator. Compared to other hydrocarbon fuels, methane produces less carbon dioxide for each unit of heat released. At about 891 kJ/mol, methane's heat of combustion is lower than any other hydrocarbon but the ratio of the heat of combustion (891 kJ/mol) to the molecular mass (16.0 g/mol, of which 12.0 g/mol is carbon) shows that methane, being the simplest hydrocarbon, produces more heat per mass unit (55.7 kJ/g) than other complex hydrocarbons. In many cities, methane is piped into homes for domestic heating and cooking. In this context it is usually known as natural gas, which is considered to have an energy content of 39 megajoules per cubic meter, or 1,000 BTU per standard cubic foot.

Methane in the form of compressed natural gas is used as a vehicle fuel and is claimed to be more environmentally friendly than other fossil fuels such as gasoline/petrol and diesel. Research into adsorption methods of methane storage for use as an automotive fuel has been conducted. 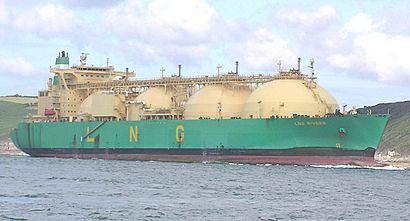 Liquefied natural gas (LNG) is natural gas (predominantly methane, CH4) that has been converted to liquid form for ease of storage or transport.

Liquefied natural gas occupies about 1/600th the volume of natural gas in the gaseous state at room temperature and atmospheric pressure. It is odorless, colorless, non-toxic and non-corrosive. Hazards include flammability after vaporization into a gaseous state, freezing, and asphyxia.

The liquefaction process involves removal of certain components, such as dust, acid gases, helium, water, and heavy hydrocarbons, which could cause difficulty downstream. The natural gas is then condensed into a liquid at close to atmospheric pressure (maximum transport pressure set at around 25 kPa or 3.6 psi) by cooling it to approximately −162 °C (111 K).

LNG achieves a higher reduction in volume than compressed natural gas (CNG) so that the energy density of LNG is 2.4 times greater than that of CNG or 60% that of diesel fuel. This makes LNG cost efficient to transport over long distances where pipelines do not exist. Specially designed cryogenic sea vessels (LNG carriers) or cryogenic road tankers are used for its transport. Even if pressurized, methane must be cooled below its critical temperature of −82.3 °C (190.8 K) in order to be liquefied.

LNG, when it is not highly refined for special uses, is principally used for transporting natural gas to markets, where it is regasified and distributed as pipeline natural gas. It can be used in LNG-fueled road vehicles. However, it remains more common to design vehicles to use compressed natural gas. As of 2002[update], the relatively higher cost of LNG production and the need to store LNG in more expensive cryogenic tanks had slowed widespread commercial use.

Natural gas located far from its user base is often released into the atmosphere or flared. Some is subjected to gas to liquids technologies (GTL) to produce liquid fuels, which are more readily transported than methane.

Refined liquid methane is used as a rocket fuel. Methane is reported to offer the advantage over kerosene of depositing less carbon on the internal parts of rocket motors, reducing the difficulty of re-use of boosters.

Methane is abundant in many parts of the Solar system and potentially could be harvested on the surface of another solar-system body (in particular, using methane production from local materials found on Mars or Titan), providing fuel for a return journey.

Methane is converted to synthesis gas, a mixture of carbon monoxide and hydrogen, by steam reforming. This endergonic process (requiring energy) utilizes catalysts and requires high temperatures, around 700–1100 °C:

Methane is also subjected to free-radical chlorination in the production of chloromethanes, although methanol is a more typical precursor.

All content from Kiddle encyclopedia articles (including the article images and facts) can be freely used under Attribution-ShareAlike license, unless stated otherwise. Cite this article:
Methane Facts for Kids. Kiddle Encyclopedia.