The Door to Hell, a natural gas field in Turkmenistan. It has been burning continuously since 1971, fed by the rich natural gas deposits in the area.

Natural gas is a mixture. It consists mainly of hydrocarbons. The main component is methane. Natural gas is often found in the ground, either alone or together with petroleum. Landfills and natural processes produce a little methane. Usually it is transported to users in a pipeline.

Most natural gas is burnt as a fuel to produce energy. It burns with a clean blue flame, causing little pollution.

Natural gas is also converted into many different industrial chemicals. It is the most common feedstock for making pure hydrogen. Hydrogen is used as fuel in fuel cells, and to make ammonia. Ammonia is used as a fuel, as a fertilizer for crops, and for making many other things. Natural gas is also converted into monomers to make many plastic products. 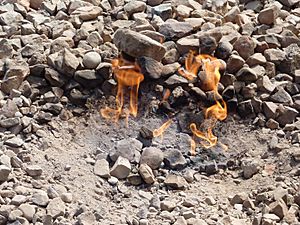 Burning of natural gas coming out of the ground in Taiwan

Natural gas was discovered accidentally in ancient China, as it resulted from the drilling for brines. Natural gas was first used by the Chinese in about 500 BC (possibly even 1000 BC). They discovered a way to transport gas seeping from the ground in crude pipelines of bamboo to where it was used to boil salt water to extract the salt, in the Ziliujing District of Sichuan.

The discovery and identification of natural gas in the Americas happened in 1626. In 1821, William Hart successfully dug the first natural gas well at Fredonia, New York, United States, which led to the formation of the Fredonia Gas Light Company.

Natural gas is a major source of electricity generation through the use of gas turbines and steam turbines. Most grid peaking power plants and some off-grid engine-generators use natural gas. Particularly high efficiencies can be achieved through combining gas turbines with a steam turbine in combined cycle mode. Natural gas burns more cleanly than other fossil fuels, such as oil and coal, and produces less carbon dioxide per unit energy released.

For an equivalent amount of heat, burning natural gas produces about 30% less carbon dioxide than burning petroleum and about 45% less than burning coal. Combined cycle power generation using natural gas is thus the cleanest source of power available using fossil fuels, and this technology is widely used wherever gas can be obtained at a reasonable cost. Fuel cell technology may eventually provide cleaner options for converting natural gas into electricity, but as yet it is not price-competitive.

Natural gas is supplied to homes where it is used for such purposes as cooking in natural gas-powered ranges and ovens, natural gas-heated clothes dryers, heating/cooling and central heating. Home or other building heating may include boilers, furnaces, and water heaters.

CNG is used in rural homes without connections to piped-in public utility services, or with portable grills. Natural gas is also supplied by independent natural gas suppliers through Natural Gas Choice programs throughout the United States. However, due to CNG being less economical than LPG, LPG (propane) is the dominant source of rural gas. 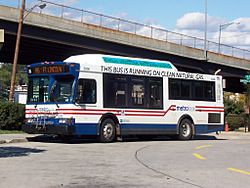 A Washington, D.C. Metrobus, which runs on natural gas.

Compressed natural gas (methane) is an alternative to other automobile fossil fuels such as gasoline (petrol) and diesel. As of 2008 there were 9.6 million natural gas vehicles worldwide, led by Pakistan (2.0 million), Argentina (1.7 million), Brazil (1.6 million), Iran (1.0 million), and India (650,000). The energy efficiency is generally equal to that of gasoline engines, but lower compared with modern diesel engines. Gasoline/petrol vehicles converted to run on natural gas suffer because of the low compression ratio of their engines, resulting in a cropping of delivered power while running on natural gas (10%-15%). CNG-specific engines, however, use a higher compression ratio due to this fuel's higher octane number of 120–130.

Natural gas is a major feedstock for the production of ammonia, via the Haber process, for use in fertilizer production.

Russian aircraft manufacturer Tupolev is currently running a development program to produce LNG- and hydrogen-powered aircraft. The advantages of liquid methane as a jet engine fuel are that it has more specific energy than the standard kerosene mixes do and that its low temperature can help cool the air which the engine compresses for greater volumetric efficiency, in effect replacing an intercooler. Alternatively, it can be used to lower the temperature of the exhaust.

Natural gas can be used to produce hydrogen, with one common method being the hydrogen reformer. Hydrogen has various applications: it is a primary feedstock for the chemical industry, a hydrogenating agent, an important commodity for oil refineries, and a fuel source in hydrogen vehicles.

Natural gas is also used in the manufacture of fabrics, glass, steel, plastics, paint, and other products.

All content from Kiddle encyclopedia articles (including the article images and facts) can be freely used under Attribution-ShareAlike license, unless stated otherwise. Cite this article:
Natural gas Facts for Kids. Kiddle Encyclopedia.