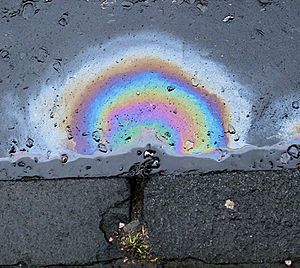 Diesel does not mix with water.

Diesel oil or diesel fuel is a type of fuel for cars. It is also an oil used for an energy source. It is made from petroleum and from various other sources.

It is named after Rudolf Diesel who in 1892 invented the diesel engine.

Diesel fuel originated from experiments conducted by German scientist and inventor Rudolf Diesel for his compression-ignition engine he invented in 1892. Diesel originally designed his engine to use coal dust as fuel, and experimented with other fuels including vegetable oils, such as peanut oil, which was used to power the engines which he exhibited at the 1900 Paris Exposition and the 1911 World's Fair in Paris.

Diesel fuel is produced from various sources, the most common being petroleum. Other sources include biomass, animal fat, biogas, natural gas, and coal liquefaction. 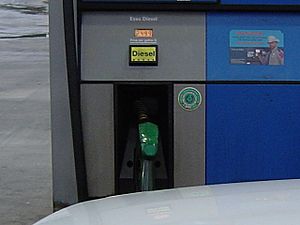 Petroleum diesel, also called petrodiesel, or fossil diesel is the most common type of diesel fuel. It is produced from the fractional distillation of crude oil between 200 °C (392 °F) and 350 °C (662 °F) at atmospheric pressure, resulting in a mixture of carbon chains that typically contain between 8 and 21 carbon atoms per molecule.

Synthetic diesel can be produced from any carbonaceous material, including biomass, biogas, natural gas, coal and many others. The raw material is gasified into synthesis gas, which after purification is converted by the Fischer–Tropsch process to a synthetic diesel.

The process is typically referred to as biomass-to-liquid (BTL), gas-to-liquid (GTL) or coal-to-liquid (CTL), depending on the raw material used. 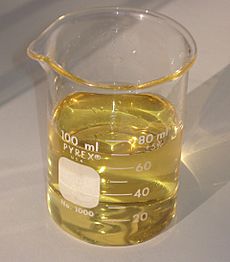 Biodiesel made from soybean oil

Fatty-acid methyl ester (FAME), more widely known as biodiesel, is obtained from vegetable oil or animal fats (biolipids) which have been transesterified with methanol. It can be produced from many types of oils, the most common being rapeseed oil (rapeseed methyl ester, RME) in Europe and soybean oil (soy methyl ester, SME) in the US. Methanol can also be replaced with ethanol for the transesterification process, which results in the production of ethyl esters. The transesterification processes use catalysts, such as sodium or potassium hydroxide, to convert vegetable oil and methanol into FAME and the undesirable byproducts glycerine and water, which will need to be removed from the fuel along with methanol traces. FAME can be used pure (B100) in engines where the manufacturer approves such use, but it is more often used as a mix with diesel, BXX where XX is the biodiesel content in percent.

Unsaturated fatty acids are the source for the lower oxidation stability; they react with oxygen and form peroxides and result in degradation byproducts, which can cause sludge and lacquer in the fuel system.

This category of diesel fuels involves converting the triglycerides in vegetable oil and animal fats into alkanes by refining and hydrogenation, such as H-Bio. The produced fuel has many properties that are similar to synthetic diesel, and are free from the many disadvantages of FAME.

Unlike gasoline and liquefied petroleum gas engines, diesel engines do not use high-voltage spark ignition (spark plugs). An engine running on diesel compresses the air inside the cylinder to high pressures and temperatures (compression ratios from 14:1 to 18:1 are common in current diesel engines); the engine generally injects the diesel fuel directly into the cylinder, starting a few degrees before top dead center (TDC) and continuing during the combustion event. The high temperatures inside the cylinder cause the diesel fuel to react with the oxygen in the mix (burn or oxidize), heating and expanding the burning mixture to convert the thermal/pressure difference into mechanical work, i.e., to move the piston. Engines have glow plugs and grid heaters to help start the engine by preheating the cylinders to a minimum operating temperature. Diesel engines are lean burn engines, burning the fuel in more air than is needed for the chemical reaction. They thus use less fuel than rich burn spark ignition engines which use a stoichiometric air-fuel ratio (just enough air to react with the fuel). As Professor Harvey of the University of Toronto notes, "due to the absence of throttling [constant amount of air admitted, per unit fuel, with no user-determined variation], and the high compression ratio and lean fuel mixture, diesel engines are substantially more efficient than spark-ignited engines", generally; Harvey cites the side-by-side comparisons of Schipper et al. and the estimates of >20% lower fuel use and (given differences in energy content between fuel types) >15% lower energy use. Gas turbine and some other types of internal combustion engines, and external combustion engine, both can also be designed to take diesel fuel.

The viscosity requirement of diesel fuel is usually specified at 40 °C. A disadvantage of diesel as a vehicle fuel in cold climates, is that its viscosity increases as the temperature decreases, changing it into a gel (see Compression Ignition – Gelling) that cannot flow in fuel systems. Special low-temperature diesel contains additives to keep it liquid at lower temperatures, but starting a diesel engine in very cold weather may still pose considerable difficulties. Another disadvantage of diesel engines compared to petrol/gasoline engines is the possibility of diesel engine runaway failure. Since diesel engines do not need spark ignition, they can run as long as diesel fuel is supplied. Fuel is typically supplied via a fuel pump. If the pump breaks down in an "open" position, the supply of fuel will be unrestricted, and the engine will run away and risk terminal failure.

With turbocharged engines, the oil seals on the turbocharger may fail, allowing lubricating oil into the combustion chamber, where it is burned like regular diesel fuel. In vehicles or installations that use diesel engines and also bottled gas, a gas leak into the engine room could also provide fuel for a runaway, via the engine air intake.

The crank case ventilation of modern road-use diesel engines is diverted into the intake manifold, because ventilating the crank case into outside air is inadvisable due to lubricant mist it contains. If the engine's piston rings malfunction, this will cause excessive pressure in the crank case forcing mist of engine lubricant into the intake manifold. Since most engines use oil which can be burnt in the same fashion as diesel, this will result in diesel engine runaway. To prevent that, more premium crank case ventilation solutions are fitted with a filter to catch out lubricant mist.

Most modern road use diesel engines are provided with an FRP valve in the intake manifold (usually mistaken by some as a petrol engine throttle body). In most basic applications this valve will close a flow of air mixture to the engine when the vehicle is switched off, preventing diesel engine runaway by starving the engine of oxygen; this will also make standard shutdown much smoother by eliminating compression and decompression rattle by making the pistons effectively work in vacuum. In more advanced control systems this FRP valve can be shut by an electronic control unit when it senses runaway scenario. 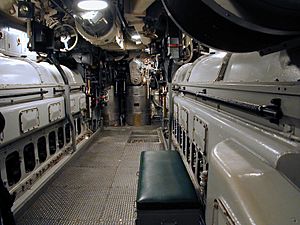 Diesel fuel is widely used in most types of transportation. Trucks and buses, which were often gasoline-powered in the 1920s through 1950s, are now almost exclusively diesel-powered. The gasoline-powered passenger automobile is the major exception; diesel cars are less numerous worldwide.

Diesel displaced coal and fuel oil for steam-powered vehicles in the latter half of the 20th century, and is now used almost exclusively for the combustion engines of self-powered rail vehicles (locomotives and railcars). 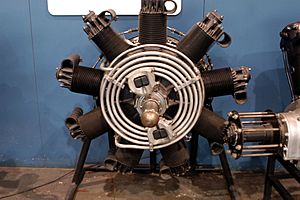 The first diesel-powered flight of a fixed-wing aircraft took place on the evening of 18 September 1928, at the Packard Proving Grounds near Utica, Michigan. With Captain Lionel M. Woolson and Walter Lees at the controls the first "official" test flight was taken the next morning, flying a Stinson SM1B (X7654), powered by a Packard DR-980 9-cylinder diesel radial engine, designed by Woolson. Charles Lindbergh flew the same aircraft and in 1929, it was flown 621 miles (999 km) nonstop from Detroit to Langley Field, near Norfolk, Virginia. In 1931, Walter Lees and Fredrick Brossy set the nonstop flight record flying a Bellanca powered by a Packard diesel for 84 hours and 32 minutes. X7654 is now owned by Greg Herrick and is at the Golden Wings Flying Museum near Minneapolis, Minnesota.

Diesel engines for airships were developed in both Germany and the United Kingdom by Daimler-Benz and Beardmore produced the Daimler-Benz DB 602 and Beardmore Typhoon respectively. The LZ 129 Hindenburg rigid airship was powered by four Daimler-Benz DB 602 16-cylinder diesel engines, each with 1,200 hp (890 kW) available in bursts and 850 horsepower (630 kW) available for cruising. The Beardmore Typhoon powered the ill-fated R101 airship, built for the Empire airship programme in 1931.

With a production run of at least 900 engines, the most-produced aviation diesel engine in history was probably the Junkers Jumo 205. Similar developments from the Junkers Motorenwerke and licence-built versions of the Jumo 204 and Jumo 205, boosted German diesel aero-engine production to at least 1000 examples, the vast majority of which were liquid-cooled, opposed-piston, two-stroke engines.

In the Soviet Union significant progress towards practical diesel aero-engines was made by the TsIAM (Tsentral'nyy Institut Aviatsionnovo Motorostroyeniya – central institute of aviation motors) and particularly by A.D. Charomskiy, who nursed the Charomskiy ACh-30 into production and limited operational use.

Armored fighting vehicles use diesel because of its lower flammability risks and the engines' higher provision of torque and lower likelihood of stalling.

Tractors and heavy equipment were often multifuel in the 1920s through 1940s, running spark-ignition and low-compression engines. Thus many farm tractors of the era could burn gasoline, alcohol, kerosene, and any light grade of fuel oil such as diesel fuel, heating oil, or tractor vaporising oil, according to whichever was most affordable in any region at any given time. On U.S. farms during this era, the name "distillate" often referred to any of the aforementioned light fuel oils. The engines did not start as well on distillate, so typically a small auxiliary gasoline tank was used for cold starting, and the fuel valves were adjusted several minutes later, after warm-up, to switch to distillate. Engine accessories such as vaporizers and radiator shrouds were also used, both with the aim of capturing heat, because when such an engine was run on distillate, it ran better when both it and the air it inhaled were warmer rather than at ambient temperature. Dieselization with dedicated diesel engines (high-compression with mechanical fuel injection and compression ignition) replaced such systems and made more efficient use of the diesel fuel being burned.

Poor quality diesel fuel has been used as an extraction agent for liquid–liquid extraction of palladium from nitric acid mixtures. Such use has been proposed as a means of separating the fission product palladium from PUREX raffinate which comes from used nuclear fuel. In this system of solvent extraction, the hydrocarbons of the diesel act as the diluent while the dialkyl sulfides act as the extractant. This extraction operates by a solvation mechanism. So far, neither a pilot plant nor full scale plant has been constructed to recover palladium, rhodium or ruthenium from nuclear wastes created by the use of nuclear fuel.

Diesel fuel is also often used as the main ingredient in oil-base mud drilling fluid. The advantage of using diesel is its low cost and that it delivers excellent results when drilling a wide variety of difficult strata including shale, salt and gypsum formations. Diesel-oil mud is typically mixed with up to 40% brine water. Due to health, safety and environmental concerns, Diesel-oil mud is often replaced with vegetable, mineral, or synthetic food-grade oil-base drilling fluids, although diesel-oil mud is still in widespread use in certain regions.

During development of rocket engines in Germany during World War II J-2 Diesel fuel was used as the fuel component in several engines including the BMW 109-718. J-2 diesel fuel was also used as a fuel for gas turbine engines.

All content from Kiddle encyclopedia articles (including the article images and facts) can be freely used under Attribution-ShareAlike license, unless stated otherwise. Cite this article:
Diesel fuel Facts for Kids. Kiddle Encyclopedia.