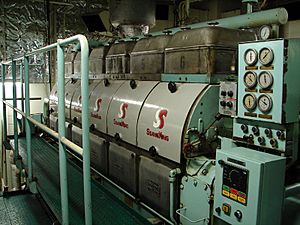 The name diesel is given to an engine invented by a German named Rudolf Diesel in the late 19th century. It is one of the most used kinds of internal combustion engine.

Most other engines need a system called an ignition system – one that uses an electric spark – in order to burn the mix of fuel and air and make power. Other types of ignition systems use compressed air from an outside source, such as an air compressor. A diesel does not. It burns a diesel fuel (similar to heating oil) through very high compression or pressing together of the mix. A tiny bit of fuel is injected, or forced, into the engine's cylinders at just the right moment. Since gases heat when they are pressed together, the compression of the air and fuel mix cause the mix to explode within the cylinder.

Diesel engines make very good use of the fuel they burn. They also make lots of torque (pronounced "tork"), or twisting power. An engine with a lot of torque will be able to spin its shaft even if it is very hard to do so. This makes a diesel engine a good choice in heavy equipment like trucks, trains and construction machines. The very big trucks on the road have diesel engines in them. So do train locomotives, unless they are electric or the old steam-powered kind.

A diesel engine can also be made to run on canola oil made from old cooking oil. This type of fuel is called biodiesel. Running a diesel engine on biodiesel fuel makes the exhaust smell like food. Vegetable oil as fuel is not a new idea. The engine that Rudolf Diesel used to demonstrate his new idea ran on canola oil.

All content from Kiddle encyclopedia articles (including the article images and facts) can be freely used under Attribution-ShareAlike license, unless stated otherwise. Cite this article:
Diesel engine Facts for Kids. Kiddle Encyclopedia.