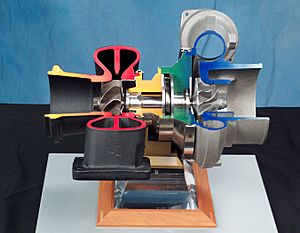 A turbocharger, or turbo, is a gas compressor. It is used to force air into an internal combustion engine. A turbocharger is a form of forced induction. It increases the amount of air entering the engine to create more power. A turbocharger has the compressor powered by a turbine. The turbine is driven by the exhaust gas from the engine. It does not use a direct mechanical drive. This helps to improve the performance of the turbocharger.

Some companies such as Teledyne Continental Motors still use the term turbosupercharger to refer to their turbochargers.

An engine creates power by burning a mixture of air and fuel. The air and fuel are put into the cylinders to burn. When they burn, they push the piston down. The piston turns the crankshaft and creates power. For car engines, this is measured horsepower.

A turbocharger is a small fan pump that spins around a shaft. The pump is driven by the pressure of the exhaust gas. A turbocharger consists of a turbine and a compressor. They are both mounted on the same shaft. The turbine is a heat engine. It converts exhaust heat and pressure to rotation. This rotation is used to turn the compressor. The compressor takes in the draws in the outside air. It squeezes or compresses the air. It then sends the air to the engine. Because the air pressure has been increased, more air and fuel may be put into the cylinders. This is sometimes called boost pressure.With more fuel to burn, the engine can create more power. This increases the horsepower of the engine.

The turbocharger was invented by Swiss engineer Alfred Büchi. His patent was applied for use in 1905. Diesel ships and locomotives with turbochargers began appearing in the 1920s.

In 1918, General Electric engineer Sanford Moss attached a turbocharger to a Liberty aircraft engine. The engine was tested at Pikes Peak in Colorado at 14,000 feet (4,300 m). The test was to show that the turbo could add the power airplanes lose at high altitude. Internal combustion engines lose power because at high altitude, the outside air pressure is low. Less air and fuel can be drawn into the engine.

Turbochargers were first used in production aircraft engines in the 1930s. 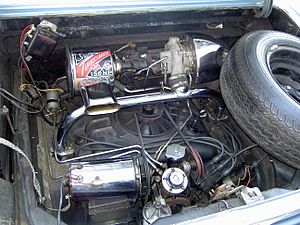 The Chevrolet Corvair's turbocharged engine. The turbo, located at top right, feeds pressurized air into the engine through the chrome T-pipe spanning the engine.

The first turbocharged diesel truck was built by the "Swiss Machine Works Saurer" in 1938. The first production turbocharged automobile engines came from General Motors in 1962. The Oldsmobile Cutlass Jetfire was fitted with a turbocharger and the Chevrolet Corvair Monza Spyder with a TRW turbocharger.

In 1974, at Paris Auto Show, Porsche displayed the 911Turbo. This was during the height of the oil crisis. The 911Turbo was the first production sports car with exhaust turbocharger and pressure regulator. The pressure regulator was the wastegate. The first production turbo diesel automobiles were the Mercedes 300SD with a Garrett turbocharger, and the Peugeot 604. Both were introduced in 1978. Today, most automotive diesels are turbocharged.

The first successful turbocharged racing engine appears to have been in 1952. Fred Agabashian in a diesel-powered Cummins Special qualified for the pole position at the Indianapolis 500. He led for 175 miles (282 km). Then the turbo was damaged by tire debris. Offenhauser's turbocharged engines first came to Indianapolis in 1966. Their first victory came in 1968 using a Garrett AiResearch turbocharger. Turbocharged cars dominated the 24 Hours of Le Mans between 1976 and 1988, and then from 2000-2007.

Formula One had a "Turbo Era" from 1977 until 1989. Engines with a capacity of 1500 cc could produce as much as 1500 hp (1119 kW). In 1977, Renault was the first to use turbocharged engines F1. The performance made up for the high cost. Other engine manufacturers started building turbos. The turbocharged engines took over the F1 field. They ended the Ford Cosworth DFV era in the mid 1980s. the FIA decided that turbochargers were making the sport too dangerous and expensive. In 1987, the FIA decided to limit the maximum boost of the turbos. In 1989, turbochargers were banned completely.

World Rally Car racers have long preferred turbocharged engines. They offer a very high power-to-weight ratios. Turbo power started to rise to the levels of F1 cars. The FIA did not ban turbos. They restrict the turbo power by limiting the inlet diameter.

Some engines use two turbochargers. They will both be the same size. They are normally smaller than used on single-turbos engines. They are often used on V-type engines, such as V6s and V8s. Each turbo is powered by a separate exhaust pipe from the engine. Because they are smaller, they reach their optimal boost more quickly. This setup of turbos is normally called a parallel twin-turbo system. The first production car with parallel twin turbochargers was the Maserati Biturbo of the early 1980s.

Some car builders avoid turbo lag (below) by using two small turbos. The normal setup is to have one turbo working all the time. The seconds turbo will only start working at higher RPM. Because the turbos are smaller, they do not have as much turbo lag. The second turbo will be able get to full speed before it is required. This setup is normally called a sequential twin-turbo. Porsche first used this technology in 1985 in the Porsche 959.

Using turbochargers to increase performance was very appealing to the Japanese builders in the 1980s. The first example of a turbocharged motorcycle is the 1978 Kawasaki Z1R TC. It used a Rayjay ATP turbo kit to build 0.35 bar (5 lb) of boost. This raised the power up from 90 hp (67 kW) to 105 hp (78 kW). It was only slightly faster than the standard model. Several other motorcycles were built with turbos. Turbo applications for motorcycles increased their price. The small gains in performance were not worth the extra cost. Since the mid 1980s, no manufacturers have produced turbocharged motorcycles.

A natural use of the turbocharger is with aircraft engines. As an aircraft climbs to higher altitudes, the pressure of the surrounding air quickly decreases. A turbocharger fixes this problem by compressing the air to higher pressures.

Compressing the air increases its temperature. This causes several problems. Increased temperatures can lead to engine knock because of increased cylinder head temperatures. Hot air cannot burn as much fuel as cold air. This will decrease the power produced.

The common method of dealing with the hotter air is to cool it. The most common way is to use an inter-cooler or after-cooler. These coolers reduce the temperature of the air before it enters the engine.

Modern turbocharged aircraft usually do not need to cool the incoming air. Their turbochargers are generally small and the pressures created are not very high. Thus, the air temperature is not increased very much.

To run a supercharger, it needs to take away some power from the engine. The power it adds is more than the power it uses. A turbocharger uses the exhaust gases. This is heat energy that would be wasted.

Turbochargers can be damaged by dirty or poor oil. Most manufacturers recommend more frequent oil changes for turbocharged engines. The turbocharger will heat when running. Many recommend letting the engine idle for several minutes before shutting the engine off. This gives the turbo time to cool down. This will increase the life of the turbo.

The time required for the turbo to build up the needed pressure is called turbo lag. This is noticed as a hesitation in engine response. This is caused by the time taken for the exhaust system to speed up the turbine. The directly-driven compressor in a supercharger does not have this problem.

Lag can be reduced by using lighter parts. This allows the turbine to start faster. Other mechanical changes can reduce turbo lag, but at an increase in cost.

All content from Kiddle encyclopedia articles (including the article images and facts) can be freely used under Attribution-ShareAlike license, unless stated otherwise. Cite this article:
Turbocharger Facts for Kids. Kiddle Encyclopedia.