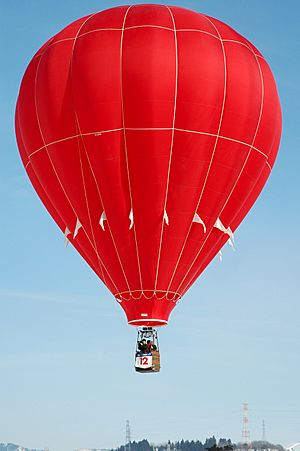 A balloon is a kind of no-power aircraft

An aircraft is a flying machine. There are many different kinds of aircraft.

Most aircraft use engine power. Examples are aeroplanes, helicopter, and airships. Gliders and balloons use no power. A few aircraft use muscle power.

Big aeroplanes for transporting people are called airliners. Airliners are the quickest way to travel. Airliners can fly over mountains and bad weather. Airliners have complex technology to make them fly quickly, safely and for less money.

The human activity that surrounds aircraft is called aviation. The science of aviation, including designing and building aircraft, is called aeronautics. Crewed aircraft are flown by an onboard pilot, but unmanned aerial vehicles may be remotely controlled or self-controlled by onboard computers.

Flying model craft and stories of manned flight go back many centuries; however, the first manned ascent — and safe descent — in modern times took place by larger hot-air balloons developed in the 18th century. Each of the two World Wars led to great technical advances. Consequently, the history of aircraft can be divided into five eras:

All content from Kiddle encyclopedia articles (including the article images and facts) can be freely used under Attribution-ShareAlike license, unless stated otherwise. Cite this article:
Aircraft Facts for Kids. Kiddle Encyclopedia.