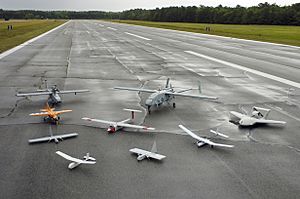 An unmanned aerial vehicle (often called a drone) is an aircraft that is not operated by a pilot on board.

Drones may have an onboard computer to take care of adjustments to wind and changes in air pressure. Sometimes they are programmed to a particular target. Important decisions are usually supervised by people on the ground communicating by radio.

Large UAVs are mostly used by military forces, for example for reconnaissance. Some of them are programmed to be a target, to be shot at. A few carry weapons for unmanned combat. Drones also have civilian uses, such as firefighting or taking photographs.

Drones come in different sizes. Wingspans range from a few centimetres to about 60 metres (200 ft), the size of regular, manned aircraft.

Photographers mount cameras on drones to make pictures from above. Google has built and tested drones, to be used for goods deliveries. Private drones are sometimes called a nuisance, even a danger.

All content from Kiddle encyclopedia articles (including the article images and facts) can be freely used under Attribution-ShareAlike license, unless stated otherwise. Cite this article:
Unmanned aerial vehicle Facts for Kids. Kiddle Encyclopedia.