In general, missile may refer to anything thrown or launched object at a target like a javelin or darts. Nowadays, it means, mostly, a self-propelled guided weapon system. 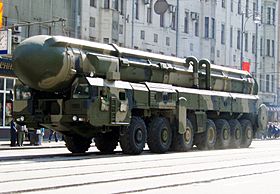 Missiles are used in war to destroy military targets. Missiles can carry explosives or other destructive loads. The loads a missile may carry are called a "payload". This payload is not always harmful to people. For example, cruise missiles have carried "graphite bombs" to destroy electrical power systems without much collateral damage.

The two main kinds of missiles are simple "rockets" and "guided missiles". A rocket is no longer controlled once it has been launched. Most guided missile are also propelled by a rocket engine but can be controlled after it has been launched. Some missiles used in anti-aircraft warfare, such as the AIM-9 Sidewinder, guide themselves with temperature. Others guide themselves by radar or are under radio control.

The V-1 flying bomb was an early cruise missile, a little airplane with a bomb, propelled by a jet engine instead of a rocket.

All content from Kiddle encyclopedia articles (including the article images and facts) can be freely used under Attribution-ShareAlike license, unless stated otherwise. Cite this article:
Missile Facts for Kids. Kiddle Encyclopedia.