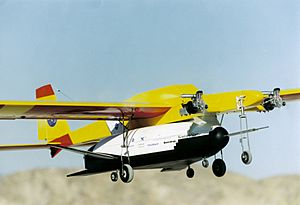 This radio controlled airplane is carrying a scale model of Lockheed Martin X-33 and is taking part in NASA research. 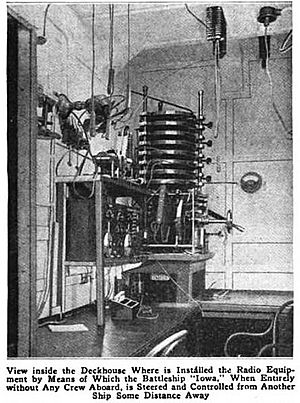 Radio control is a way of making models of cars, boats, helicopters and airplanes move on their own like real ones.

Invisible electrical signals called radio waves come out of a part called a transmitter. The transmitter is a box with the model's controls on it. When a control is moved, the radio signal changes. The part on the model that takes the changing signals and helps turn them into movement is called the receiver. The receiver then tells a special kind of motor called a servo to move part of the model. On a car or boat, a servo is usually used for steering. Model sailboats use a servo to adjust the sail as well as the rudder, or steering device. On airplanes and helicopters, servos are used not only for steering but for up and down pitch. If the model uses an engine to make it run, a servo is used to control the speed of the engine. A model which operates with an electric motor usually has something called an electronic speed control or "ESC" to control its speed.

Radio control was once used by the military to control large weapons.

All content from Kiddle encyclopedia articles (including the article images and facts) can be freely used under Attribution-ShareAlike license, unless stated otherwise. Cite this article:
Radio control Facts for Kids. Kiddle Encyclopedia.