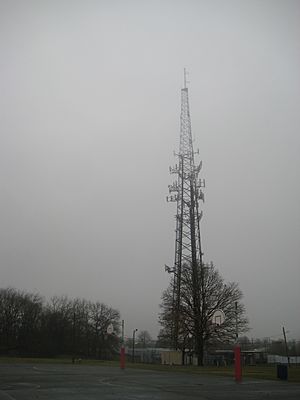 Radio transmitters on a tower.

In electronics, a transmitter is a device which sends signals using radio waves.

The transmitter converts direct current (DC) into alternating current (AC) at the desired frequency. Most transmitters use a quartz crystal to set the frequency of the resulting carrier wave. A modulator modifies the carrier wave, by frequency modulation or amplitude modulation or some other kind, to include the information needed, such as an audio or video signal. The modified waves are sent by an antenna to another antenna at the receiver which extracts the information from the waves.

All content from Kiddle encyclopedia articles (including the article images and facts) can be freely used under Attribution-ShareAlike license, unless stated otherwise. Cite this article:
Transmitter Facts for Kids. Kiddle Encyclopedia.