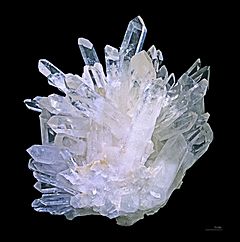 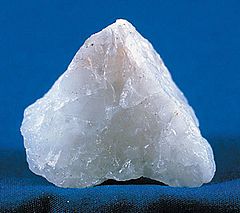 Quartz is the second most common mineral in Earth's continental crust. Its crystal structure is a framework of SiO4 silicon–oxygen tetrahedra. Each shares an oxygen atom oxygen with another tetrahedron, so the overall chemical formula is SiO2 or silica.

There are many different varieties of quartz, some of which are semi-precious gemstones. Varieties of quartz have been used for a long time in the making of jewelry and hardstone carving. Agate, amethyst, rose quartz are all forms of quartz.

Quartz is a component used to make quartz clocks. Sand often has a lot of small quartz bits. This mineral contains silica. Quartz has a mineral hardness of 8. (mohs scale).

The word "quartz" comes from the German word "quarz".

'Fused quartz' is glass made of silica in non-crystalline form. It does not contain other ingredients. These are usually added to glass to lower the melt temperature. Fused silica has high working and melting temperatures. The properties of fused quartz are superior to those of other types of glass due to its purity. The glass is used in a number of high-tech products.

All content from Kiddle encyclopedia articles (including the article images and facts) can be freely used under Attribution-ShareAlike license, unless stated otherwise. Cite this article:
Quartz Facts for Kids. Kiddle Encyclopedia.