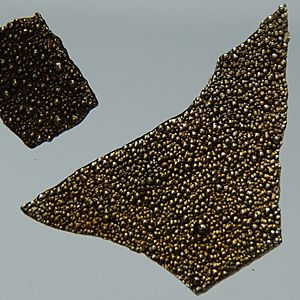 Manganese is chemical element 25 on the periodic table. Its symbol is Mn. (Some people get it confused with magnesium, the symbol is Mg). It has 25 protons. Its mass number is 54.94.

Manganese is sometimes found alloyed with iron naturally. These rocks, called meteorites, came from space. Pyrolusite is one of the main sources of manganese. It also occurs as manganese carbonate. Some silicates have manganese in them.

Manganese is used a lot in steel to make it stronger. This is the main use for manganese metal. Manganese compounds, particularly manganese(IV) oxide, are used in alkaline cells and Leclanche cells. Manganese metal is also alloyed with aluminium.

Our bodies and plants need manganese to work right. If we do not get enough manganese, we can get sick. We get manganese from our food and vitamins also have some manganese to make sure that we get enough.

Manganese dust can irritate lungs. Some manganese compounds cause toxicity when ingested. Manganese is less toxic than nickel or copper. Permanganates are the most toxic manganese compounds. When someone is exposed to manganese for a long time it can cause a problem with the nervous system.

All content from Kiddle encyclopedia articles (including the article images and facts) can be freely used under Attribution-ShareAlike license, unless stated otherwise. Cite this article:
Manganese Facts for Kids. Kiddle Encyclopedia.