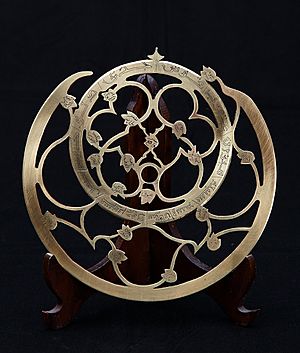 An alloy is a uniform mixture. It is made up of two or more chemical elements, of which at least one is a metal. An alloy has properties different from the metals it is made of.

Most alloys are made by melting the metals, mixing them while they are liquid to form a solution, then leaving them to cool and turn solid again.

Combining a pure metal with one or more other metals or non-metals often makes it better. For example, steel is an alloy made from iron but it is stronger than iron. Physical properties like density, reactivity and electrical and thermal (heat) conductivity may not be much different than the elements (substances) which make the alloy. But, properties like strength can be very much different.

The first alloy to be discovered was Bronze. Bronze is made from copper and tin. Bronze was discovered a very long time ago in the prehistoric period. Then, bronze was being used for making tools and weapons. This period was known as Bronze Age. But, later better alloys were discovered which replaced bronze for making tools and weapons. Now, bronze is used for making ornaments, statues, and bells. Brass is another alloy made from copper and zinc.

The term alloy means a mixture of atoms in which the main substance or the primary constituent is a metal. This primary metal is called the base or matrix.

There are some common alloys:

All content from Kiddle encyclopedia articles (including the article images and facts) can be freely used under Attribution-ShareAlike license, unless stated otherwise. Cite this article:
Alloy Facts for Kids. Kiddle Encyclopedia.