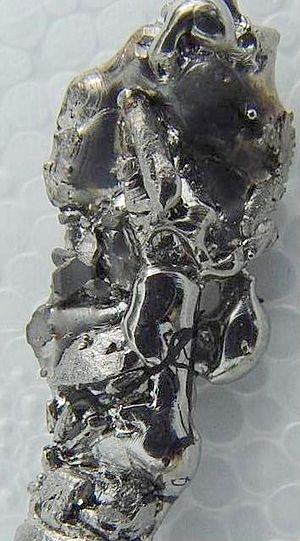 Titanium is a very strong metal that is used in special applications. The most common isotope has 26 neutrons. Titanium was discovered in 1791 by William Gregor. It is chemical element number 22 on the periodic table. Its symbol is Ti. It has 22 electrons and 22 protons. It is named after strong Greek gods named the titans.

Titanium can combine with other chemicals to make different materials. When titanium mixes with oxygen from the air, it forms titanium dioxide (TiO2), or titania. Titanium dioxide is a white pigment that is often used to make things less transparent, brighter, or rougher - because it does not react with chemicals inside the human body, it is safe to use in foods and other applications, like toothpaste. Pieces of titanium metal are protected by a shell of titanium dioxide, which forms when the metal is in the air and helps prevent chemicals from damaging the metal center.

Titanium alloys are used in aerospace engineering to make very strong and light parts of airplanes. These alloys can replace steel because they are almost as strong as steel but much less heavy, and are much stronger than aluminium alloys but only a little heavier. This means that the titanium parts can be thinner and lighter, but still withstand the same forces. It does not corrode in many conditions, not even in sea water and chlorine. However, it can burn at high temperatures, and like many metal powders, titanium dust is extremely flammable.

All content from Kiddle encyclopedia articles (including the article images and facts) can be freely used under Attribution-ShareAlike license, unless stated otherwise. Cite this article:
Titanium Facts for Kids. Kiddle Encyclopedia.