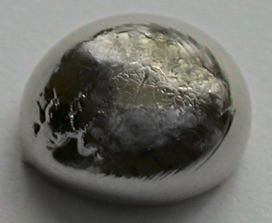 A piece of palladium.

Palladium is a chemical element. It has the chemical symbol Pd. It has the atomic number 46. It is a metal. It is silver white. In chemistry it is placed in a group of metal elements named the transition metals. It is also part of the platinum group.

Palladium has similar chemistry to platinum. It is extracted from (made by taking from) some copper and nickel ores. Its main use is as a catalyst and also in jewellery.

All content from Kiddle encyclopedia articles (including the article images and facts) can be freely used under Attribution-ShareAlike license, unless stated otherwise. Cite this article:
Palladium Facts for Kids. Kiddle Encyclopedia.